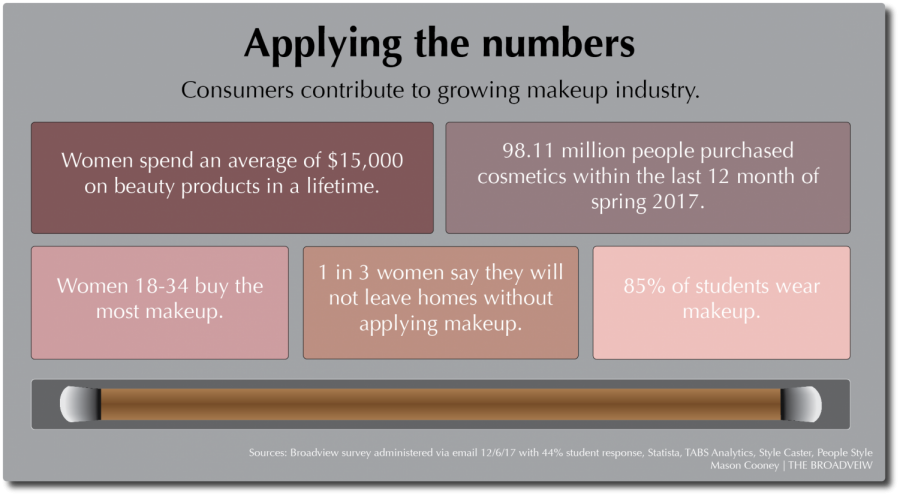 With beauty vloggers on YouTube, regular celebrity product endorsements on Instagram, and an increased presence of cosmetic companies online, the makeup and beauty industry’s marketing strategies have changed with the advent of social media.

“When I see makeup on Instagram I think I may like, I usually look into buying it,” senior Madison O’Neill said. “It’s not just the ads. The people who show off the products have a huge impact because their videos give people the chance to see what products do and how they work before buying.”

Beauty brands that pair with social media platforms can gain awareness and stay relevant to their customers. Partnerships with YouTube stars or Instagram celebrities allow companies to access a larger audience, according to marketing and creativity consultant Michelle Busse Moran (’02), who works on video and content creation specifically for beauty and skincare brands.

“Some of the companies I have worked with have paid certain celebrities like the Kardashian girls for one Instagram post showing their product,” Moran said. “The effect is massive, leading products to sometimes even sell out completely. That’s the kind of attentive audience those a-list celebrities have online.”

After seeing Kylie Jenner’s heavy online and social media presence, junior Avery Van Natta says the reality TV star and model’s line of makeup, Kylie Cosmetics, is popular because of its branding style and not necessarily because of the products’ quality.

“I don’t wear makeup, but I got Kylie Jenner’s Lip Kits for my sister,” Van Natta said. “I guess I wanted to see the difference in how they are presented online versus what they are in reality. Honestly, when I bought the kit, I was more focused on the brand name because it is so well known.”

Other popular celebrities such as Kim Kardashian and Rihanna have released beauty lines of their own that are advertised similarly to Jenner’s.

“I bought Rihanna’s Fenty Beauty Trophy Wife Highlighter and Fenty Lip Gloss after seeing them on social media,” O’Neill said. “I think that people probably tend to lean towards makeup they see online because if something is everywhere, they probably think it’s good in some way.”

“Social media has become a more nuanced way to reach sub-segments of consumers with individualized messages that appeal to them and their needs,” Dress said. “From the brands I’ve worked with at Unilever, digital-leading brands are better able to drive market share and build extreme loyalty with their shoppers.”

Before the omnipresent world of social media, brands had to rely on their ads in magazines or newspapers, according to Moran.

“There is no way to measure consumer engagement and effectiveness with print ads,” Moran said. “With social media, companies are now able to see the data from online interactives, seeing click throughs and analytics of what works and what doesn’t.”

In an age in which consumers more often than not use wireless technology before paper and cable, industries like cosmetics are often directing their efforts towards teens and young adults to gain their lifetime support, according to Moran.

“As a young person on social media, I sort of expected Kylie Jenner’s products to be magical like how they are portrayed online,” Van Natta said. “The weren’t as amazing as they seemed and I probably wouldn’t buy her products again just because I am not drawn to the makeup itself but instead the ‘cool’ reputation they have.” 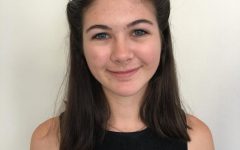 'Nude' not so nude for all 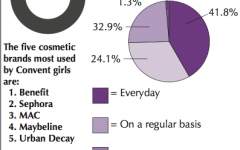 Showering with shampoo and conditioner, rinsing with an army of skin care products, or even putting on makeup may seem important for maintaining a healthier, cleaner lifestyle, but many personal care products contain harmful and unsafe chemicals that could have detrimental health effects in the future.

The Health and Environmental Research in Make-up Of Salinas Adolescents (HERMOSA) Study monitored 100 teen girls in Salinas during a three-day period in which they cut all of their normal personal care products out of their daily routines. Instead, they used pre-approved alternatives that did not contain any of the chemicals researchers were worried about.

“The study was concerned about chemicals in makeup and other personal care products that might act like hormones and mimic estrogen,” Dr. Kim Harley — associate Director for Health Effects at UC Berkeley’s Center for Environmental Research and Children’s Health — who led the study said. “We were particularly concerned about teenage girls [who] use a lot of makeup and a lot of other personal care products, and are going through a time of reproductive development.”

After comparing urine samples from before and after a three-day study period, Harley found significant results.

“On average we saw that levels of chemicals — the different hormone-disrupting chemicals — went down between 25 percent and 45 percent just in three days of using different products,” Harley said.

Some chemical ingredients in personal care products may mimic hormones such as estrogen and are suspected of provoking breast cancer, according to Harley.

“Our project was funded by the California Breast Cancer Research Program because they’re interested in how these hormone disrupting chemicals might impact breast cancer much later down the road,” Harley said. “We don’t have strong evidence that these chemicals do cause breast cancer, but we have enough evidence from animal studies to be concerned.”

Junior Worth Taylor says she only purchases organic or natural skin care products in effort to eliminate chemicals from her daily routine.

“I do not use any Sephora makeup or drugstore makeup,” Taylor said. “I only use things that are made with ingredients that I can pronounce or that I know rather than chemicals and things I learn about in chemistry class.”

Although a good method to avoid harmful chemicals, reading labels may not always prove to be reliable. Many fragrances contain phthalates, a group of chemicals that are commonly found in vinyl flooring and have affected the reproductive system in animal testing, according to the Center for Disease Control and Prevention.

Because fragrance recipes are considered proprietary and a trade secret, fragrance companies are not required to list phthalates as ingredients and instead simply write the word “parfum,” according to Harley.

“That is why, in general, if it is fragrance free, that is better,” Harley said. “If it doesn’t have ‘parfum’ or fragrance on the label, that’s good. But if you really want a fragrance, natural fragrance is better.”

Even though there is widespread concern for the safety of a particular personal care product, the Food and Drug Administration can do little about it, according to Harley.

“The FDA doesn’t have very strong regulatory powers when it comes to cosmetics,” Harley said. “The FDA was started by a law called the Drug and Cosmetics Act. In theory the Act was to oversee food, drugs and cosmetics, but the reality is the FDA has really strong powers over food and drugs and it has very weak power over cosmetics.”

Senators Dianne Feinstein and Susan Collins introduced the Personal Care Products Safety Act in May to amend the Federal Food, Drug and Cosmetic Act. The bill would strengthen the FDA’s authority to regulate ingredients in personal care products.

Some hair care products, such as Brazilian Blowout, contain formaldehyde — a known carcinogen. A hairdresser raised concern when they began having nosebleeds, eye irritation, and trouble breathing while using the product labeled “formaldehyde-free,” according to the Occupational Safety and Health Administration.

“The FDA could not do anything about it,” Harley said. “The FDA sent a very stern letter to the company saying ‘Please don’t do this anymore,’ but that was all they could do and the company had no recourse.”

Using apps such as Think Dirty – Shop Clean and the Environmental Working Group’s Healthy Living, which scan products’ barcodes and give a rating on their safety, are easy ways to find products with fewer chemicals, according to Harley.

“Everyone’s so conscious about what food they eat and eating healthy when what you put on your body is just as important,” Taylor said. “If you are putting chemicals on your skin, that’s going to cause as much harm as eating something that’s full of preservatives. It’s just as bad for you.”

'Nude' not so nude for all