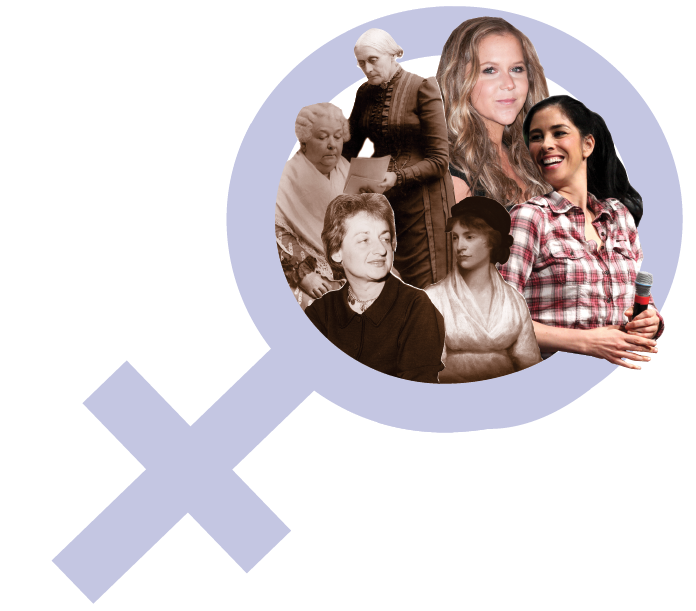 That’s what she said

From historians to comedians, feminists speak up to advocate for gender equality, using methods from literature to law to humor.

The F word is considered by some to be vulgar, controversial and unnecessary.

Socially explicit, feminism claims to advocate for equality of the sexes but is cursed with a misinterpreted meaning, causing a separation between the name and the movement.

This idea of man-hating and female domination contributes to feminism’s negative stigma, hence its alternate name, the F word, according to senior Corinne Sigmund, co-president of the Femme Alliance and the Gender and Sexuality clubs.

“It’s a risky thing to come up and speak the truth to those in power and say that women don’t get a fair share and that the ways things are structured is not fair,” Oberman said.

Individuals who support the same ideals as feminism often distance themselves from the term out of fear of being discounted, according to Oberman.

“Since the early 1970s when the contemporary women’s rights movement began to take off, I’ve noticed an increased number of young women who are frightened about how the world responds to the feminism word, the F word,” Oberman said. “In my very first job, one of my bosses said to me, ‘You’re not going to get anywhere in this profession if you use the F word.’”

Humanism, a common response to the word feminism, is most notably used by Madonna when she stated that she was a humanist, not a feminist.

This more inclusive label overcomes the negative connotation of feminism and specificity of gender inequality but misuses the historical meaning of the term as a commitment to the rational and scientific over supernatural, according to Gender Focus editor Jarrah Hodge.

“If what students mean by ‘I’m a humanist’ is ‘I’m attentive to the most vulnerable and marginalized,’ then that’s a deeply feminist approach, and I’ll take them any day whether they call themselves a feminist or not,” Oberman said. “If what they mean is everything’s already fixed, and there’s no such thing as a gender discrimination and that women are completely equal, then I think we need to have a conversation.”

Theology teacher Paul Pryor Lorentz, who identifies as a feminist, says that feminism is human rights activism that attends to a deep problem in the human family.

“I think we should be clear on who is deserving of support,” Pryor Lorentz said. “There’s a place for both, but when we want to solve a specific problem, I think it’s a benefit to say, ‘I’m a feminist, and I’m about raising up the livelihood of women.’”

Although male feminists first used the term “meninism” to label themselves, that definition has since been dropped. Meninism only gained popularity when it became a hashtag on Twitter used to mock feminists and the way they express themselves.

Soon after, men’s rights activists began to use  the term for themselves to advocate for liberation of men from societal expectations and for their empowerment, garnering both male and female supporters.

“Meninism claims that men are oppressed, which is untrue,” Sigmund said. “It does not exist to attempt to dismantle structures that do harm men such as some aspects of the patriarchy. It only exists to discredit feminists and try to keep them quiet.”

Meninists Tweets, a leading meninist account with over 900,000 followers, shares what they claim are parodies such as “I need meninism because the movie ‘Magic Mike’ promotes an unrealistic expectation of how men’s bodies should look.”

“The feminist movement, in particular, certainly makes society aware of the disadvantages of women specifically and is an ideal that should be respected and further evaluated by those with limited knowledge,” Ti Balogun, the Twitter user who is credited with the hashtag, said in an interview with Huffington Post.

On the other hand, men’s rights activists seriously point out that men face higher rates of homelessness, suicide, military death and prejudice in family courts.

With the dual usages of meninism, a Twitter user found it “impossible to tell who is serious on the hashtag.”

“On the one hand, I feel sorry for individuals who feel they have to push for [elevating men’s rights] because they feel disempowered in some way,” Pryor Lorentz said. “I also feel badly because I feel like they’re taking an inattentive standpoint to say that men are in any way disenfranchised by our societal structure. I think anyone who has paid attention for even a short while will notice that’s not the case.”

Anti-feminists often say that women have already achieved equality or that feminism is more applicable in developing countries and do not consider themselves victims.

“We fought for equality and won,” an anonymous anti-feminist posted on the popular Women Against Feminism Tumblr blog. “We don’t need superiority.”

Feminists have been quick to oppose the movement on social media, pointing out evidence of sexism and gender pay gaps.

“I don’t think that meninism brings attention to that kind of inequality,” Sigmund said. “Feminism includes dismantling the patriarchy, and the patriarchy is why men can’t show feelings and have to be strong. Dismantling gender roles is another part of feminism, so I think that encompasses the oppression men face as well. Feminism benefits both men and women.”

Oberman agrees that feminists work to challenge entrenched sexual stereotypes, such as how men have to hold in their emotions.

“I think there’s a semantic element to all popular movement,” Oberman said. “Names matter, but they’re not the only thing that matters. I want allies. Change doesn’t happen without a really broad alliance of people saying that things are in need of change.”

Oberman worries that backing away from the word feminism will cover the real, concrete problems that hold women back from full participation in society.

“People who are out there and say, ‘I work for the marginalized,’ they find themselves working for women because in any given society on any given part of the planet, the most vulnerable people are invariably young women and children,” Oberman said. “That doesn’t mean there’s no such thing as challenges faced on gender of basis for men. It just means that the most vulnerable are women and kids.”

Pryor Lorentz says that while the term is important, it is consistent advocacy and work that makes the change.

“I think that people should be allowed to label themselves however they choose,” Sigmund said. “But, it’s sad that the colloquial definition of feminism has become so warped that people feel the need to remove themselves from it, even if they believe in the same ideals.”

Comediennes get serious about gender equality

From producer Amy Schumer mocking the idea of being “not hot enough for television” to writer Sarah Silverman satirizing the existence of the wage gap, female comedians are increasingly using comedy as a platform for feminism and challenging female stereotypes.

“The way she brings up feminist issues is funny and appealing to others,” junior Georgia Ellis said about Schumer. “It stops the stereotype from perpetuating.”

Schumer mockingly exaggerates the inherent vices of female culture in a sketch on her show “Inside Amy Schumer” in which a circle of female friends each refuse to accept compliments through self-deprecation.

Feminist themes in sketches include “Plain Jane,” a female detective who is invisible because she is seen as unattractive, and a spoof birth control pill commercial mocking the difficulty women can face when trying to obtain the drug.

The following achievement, however, did not stop audiences from denouncing Schumer.

“I have fought my way through harsh criticism and death threats for speaking my mind,” Schumer said in her speech to the Ms. Foundation for Women’s 2014 Gloria Awards and Gala. “I am a woman with thoughts and questions. I say if I’m beautiful. I say if I’m strong.”

Other large-scale comedians are taking a more direct approach to spreading awareness for feminist issues.

Sarah Silverman’s public service announcement for the National Women’s Law Center went viral as she portrayed herself talking to a nurse about changing her gender to avoid being subject to the gender wage gap.

“You can bring awareness with humor in a way that is harder to do if you’re just blogging or preaching,” local comedian Kelly Anneken said. “It can associate itself with the saying that you catch more flies with honey.”

Femikaze, an all-female sketch group co-founded by Anneken and co-founder Isa Hopkins in 2011, created more opportunities and a larger audience for women in comedy, according to Anneken.

“We wanted to create an organization that possessed an unabashed feminist point of view,” Anneken said. “At the time it was important to me that people can come to this environment and see comedy by women for women.”

The sketch group launched a comedy curriculum, Laugh Out Loud, in partnership with Girls Inc. of Alameda County, a nonprofit organization that provides educational programs to young girls, particularly those in high-risk, underserved areas.

The organization’s operations ceased in June 2015 with the comedy curriculum on hiatus due to timing and financial issues. Anneken, however, is advocating for feminist issues through her own stand up.

“If I can make a contribution to advancing women’s positions in the comedy world, I want to be doing that,” Anneken said. “Luckily, in my day job, that is something I am able to do.”

Rooting an issue of women’s rights in a humorous story or a personal perspective can be a powerful means of making a point, according to Anneken.

“Your audience will be there and be open to what you have to say,” Anneken said. “I think there’s a certain fearlessness that comes with doing comedy that lies within a form of advocacy.”