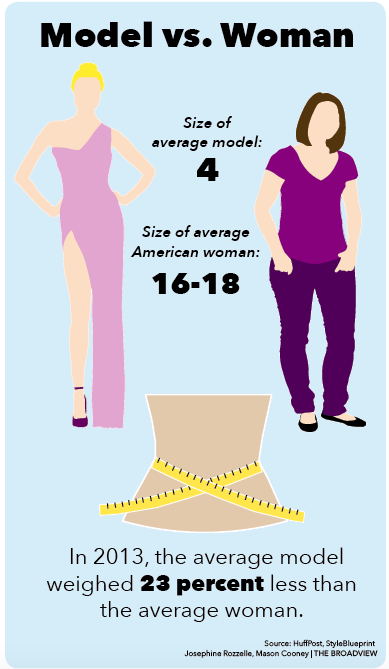 When outside appearances and weight define “healthy,” relying on scales and measuring tapes may not tell the whole story.

Some follow diets or exercise routines to stay in shape, and others use quantitative measurements like a scale or Body Mass Index to measure individual fitness, but these numbers can be misleading, according to a 2008 U.S. National Library of Medicine study.

“Studies have shown that BMI measurements are completely inaccurate because people have different body compositions, and muscle weighs more than fat,” Strength and Conditioning Coach Barclay Spring said. “If somebody is short and very muscular, their BMI is going to be high, which is thought to be bad when that’s not necessarily the case.”

Body Mass Index, a calculation based on an individual’s height and weight, places an individual in categories ranging from Underweight to Obese, which corresponds to whether or not the individual may be at a higher risk for health issues. BMI does not actually state a person’s level of health, according to Centers for Disease Control and Prevention.

While there is a correlation between BMI results and actual body fat, BMI is limited in its ability to diagnose those in the overweight and intermediate categories because it does not take into account body fat distribution, according to an NLM study.

After rowing for five years, senior Camilla Sigmund says she has seen this inaccuracy with boys on the men’s rowing team for her club.

“I have friends on the men’s team who are around 220 pounds and 6 foot 3 inches tall and their BMI tells them they are overweight,” Sigmund said. “They’re not overweight because of fat — it’s muscle. I’ve seen them lift their body weight, and there’s no way they’re unhealthy.”

Weight can fluctuate multiple times throughout the day depending on the type and amount of food a person has consumed as well as the what time a person eats, according to Spring.

“I don’t recommend people weighing themselves any more than once a week,” Spring said. “A lot of people get stuck on the number on the scale instead of the actual health of their bodies.”

Finding the correct dietary plan and exercise routine that makes the body look and feel good may seem like the end of the issue, but there is also a mental aspect of health, according to Sigmund.

“Healthy shouldn’t be all about the way that you look, it’s how you feel, which also extends to your brain,” Sigmund said. “If you’re eating well and exercising enough but are constantly thinking about your diet, your mindset is not healthy. This can be even more harmful to your health than the food you eat.”

Focusing too much on having the correct diet and exercise routine can be especially harmful to athletes who use measurements like BMI to quantify their progress.

“When people work really hard to have good body composition and get a number that says they’re unhealthy when they’re not, it can make people really upset,” Spring said.

Many athletes justify unhealthy eating habits and pressure to have a certain body type with sports they are playing, according to Sigmund. Sixty-six percent of Convent students said they have lost weight or dieted for a sport, according to a Broadview survey.

“In the athletic world, women especially are pressured to have an athletic build and playing sports can convince them that their body type isn’t good enough which is tied into the media too,” senior Kate Ward said. “What the media says is healthy won’t always mean healthy for you.”

The unrealistic standards of beauty and appearance on social media platforms, entertainment programs and by celebrities may cause teenagers to struggle with self-love and can lead to mental health issues and eating disorders.

More than 70 percent of women age 18 to 30 say they do not love their bodies, according to ABC News. These insecurities develop at a young age, and more than half of girls aged 6 to 8 say they want to be thinner, according to Common Sense Media.

“I remember having a difficult relationship with my body since I was 10, however, I struggle with it now more than ever,” junior Annabelle Applegarth, who is currently managing body image disorder, said. “As people, we want to fit in, so when we see that we don’t fit the ‘norms’ portrayed around us, it is easy for teens especially to feel bad about themselves in ways they haven’t before.”

Senior Izzy Gutierrez says one of the main reasons many girls are unhappy with their appearance stems from the manner in which television and social media platforms, such as Instagram and Snapchat, portray women. Eighty-seven percent of girls 10 to 17 who act on TV shows are significantly below the average weight for their age, according to Common Sense Media.

“Social media constantly shows an ideal body with a tiny stomach and thigh gap so that people think there is only one type of beautiful,” Gutierrez, who has struggled with depression, body dysmorphia and an eating disorder, said. “I now know there is not one type of beautiful, but having media propose this idea constantly makes teens look at themselves to try to determine if they qualify as beautiful to the world.”

More than one-half of teenage girls have taken part in unhealthy dieting methods such as excessive exercise or dangerous eating habits due to dissatisfaction with their bodies, according to the Canadian Paediatric Society.

“Sadly, I see many people in my community use unhealthy coping mechanisms to deal with pain and sadness,” Gutierrez said. “From personal experience, I know that although they seem to work in the short term, these methods are harmful in the long run. If unhealthy methods are frequently used, they can lead to long-lasting mental and physical illnesses that are hard to break.”

Teenagers are especially at risk of developing destructive eating patterns. Ninety-five percent of people with eating disorders are between the ages of 12 and 25, according to the National Association of Anorexia Nervosa and Associated Disorder.

Applegarth says there are many misconceptions about the connection between body image struggles and eating disorders.

“It’s very common for individuals to assume that having body issues automatically means that someone has an eating disorder,” Applegarth said. “This is not always true. A person can dislike the way they look, wish to have a different appearance or struggle to obtain self-love, but their relationship towards food looks different compared to those struggling with an eating disorder.”

The Convent & Stuart Hall community has addressed these common mental health issues with the aim of promoting self-love and school support through clubs like Bring Change 2 Mind, a group that works to prompt conversations and brings awareness to mental health issues, according to K-12 Director of Student Support Annie Egan.

“We have taken steps like having members of our Bring Change 2 Mind chapter share personal experiences or bringing in a variety of speakers to discuss the theme of body positivity to instill a love for yourself,” Egan said. “Increasing the general awareness of these issues leads people to ask more questions and offer concerns for their community.”

Community support systems made up of trusted adults help individuals struggling with body image avoid turning to unhealthy coping mechanisms, according to Gutierrez.

“These experiences are usually like a roller coaster ride,” Gutierrez said. “Every ride is different and it is never a linear and easy ride, so finding trusted adults and professionals is important.”

Some students at Convent & Stuart Hall are actively trying to reduce the misunderstandings of mental health and self-love issues through clubs like BC2M and through involvement with organizations like the National Eating Disorders Association.

“I recently attended the NEDA Walk, which is a walk to help end the stigma and raise awareness towards eating disorders and mental health,” Applegarth said. “During the walk, my team and I created signs to help spread different messages pertaining to BMI, the diet culture and other related topics.”

Egan says the student and faculty effort to bring awareness is unique at Convent & Stuart Hall and that the school strives to be an all-accepting and supportive community.

“The mindset here at school of ‘come as you are and you’ll be treated with great care’ makes it a healthier place,” Egan said. “This mindset means we do not want you to conform or look like somebody else. It means that you, in your body and your mind, are good enough and are worthy of just as much love and attention and care as anybody else.”

Applegarth says the most valuable assistance anyone can get who lacks self-love or struggles with body dysmorphia — a disorder diagnosed to those who think about real or perceived flaws constantly — is support from friends, family and other trusted adults such as doctors.

“If a person is struggling with their relationship with their body, the most important and helpful thing they can do is ask for support,” Applegarth said. “It’s easy to feel alone in this struggle, but chances are, there are plenty of people who are in the same boat.”