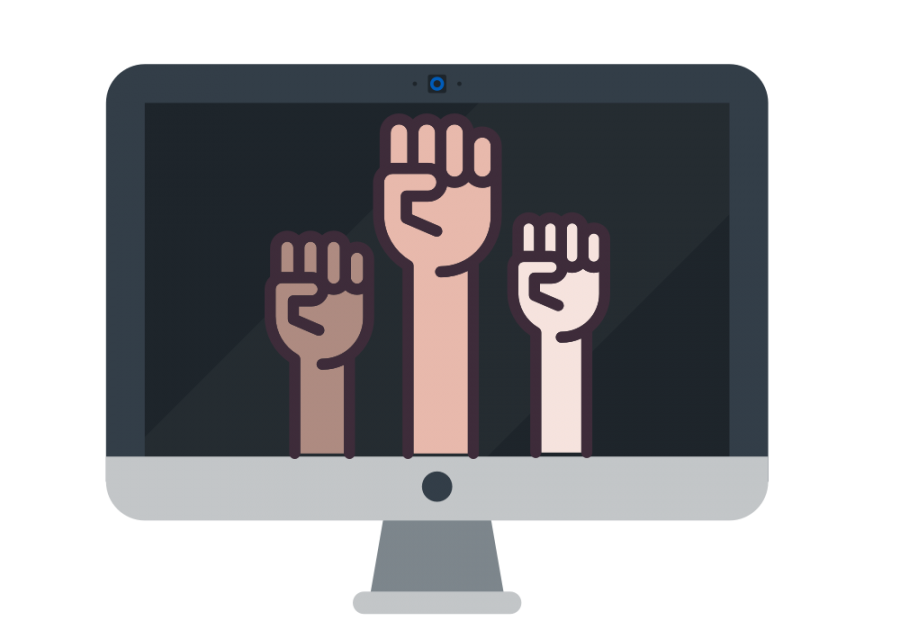 While high schoolers are often unable to take part in large-scale political or social issues in the real world, the internet is giving teens more opportunities to use their voice to spark change.

“I think students should try to take action both in the real world and online,” senior Izzy Pontecorvo said. “It might be easier for them to do it online because homework and time is definitely one thing that prevents me from taking more action in the real world.”

Online petitions, donations, social media posts and media commentary provide students wanting to give back a way to get involved right from their smart phones.

Fifty-two percent of students claimed to take more action online than through physical service, according to an anonymous online survey conducted by The Broadview.

“Four years from now, you’ll be inheriting whatever this present does.”

“High schoolers should definitely take action both online and in the real world if possible,” freshman Margaret Millar said. “I do mostly anonymous online petitions sometimes for the ASPCA and organizations against animal cruelty.”

While some may doubt the effectiveness of the internet as a means of sparking change, the ALS Ice Bucket Challenge, a viral call to action popularized in the summer of 2014 inviting participants to pour buckets of ice-cold water on themselves, successfully raised awareness and over $100 million in donations for Amyotrophic Lateral Sclerosis, commonly known as Lou Gehrig’s Disease.

As a result of the money raised from the viral challenge funding further research on ALS, scientists discovered a key gene contributing to the disease — giving researchers a new target for life saving drug development, according to the ALS Association.

“The ALS Ice Bucket Challenge is something that I found to be really unexpected,” Director of Student Life Devin DeMartini Cooke said. “At first I saw it as something that could have been really cool but turned into a pop culture phenomenon and wasn’t really going to make a difference, but it did. That’s a powerful lessen as we start navigating the different ways of connecting and fundraising online because it’s still relatively new.”

Age or experience requirements of many organizations and volunteer opportunities can leave teens feeling incapable of impacting the world around them, but the internet allows teens to become more involved without the restrictions that the “real world” can have.

Seventy-one percent of student survey respondents wrote being a high schooler inhibits them from taking serious action in the “real world.”

“People have it in their minds that we are too young to know what we are talking about, which restricts the amount of help we can do,” one responder wrote.

The web connects users to issues that would have otherwise been inaccessible, giving students the ability to take action on both a local and global scale.

“That’s one of the wonderful powers of the internet, that it really does expand your ability to connect with people,” DeMartini Cooke said. “There is something valuable about seeing people face to face, but it’s also valuable to connect with people in different societies, cultures, governments, and languages online.”

Social media can provide a public platform for students to share their views on global issues, giving teens a less restricted venue for spreading awareness on the problems that concern them.

Following activists or organizations on social media can increase a student’s awareness about issues, while posting their perspective on social or political issues creates potential to spread awareness to an even greater population.

“I always try to represent my views online,” Pontecorvo said. “If I’m for a cause I try to post something about it to show my support, like for Pride, I end up posting rainbows and stuff like that.”

Even though the internet can provide opportunities for teens to contribute, it can also be a place for reckless behavior with the intent of social change.

Comment “wars” are common on articles, YouTube videos and other forms of media, pitting multiple viewpoints against each other and creating more division between perspectives.

“A lot of times taking online action can be really looked down upon, and there’s a lot of negative feedback that I want to avoid,” Millar said. “I would definitely be scared of getting into comment arguments online.”

As political issues come to the forefront of the media with the upcoming presidential election, some students may fear getting into comment wars with both peers and strangers by showing support for a certain candidate both online and in real life.

“I talk fairly often with my friends about how to navigate politics with you guys, because it’s hard not to be polarizing,” DeMartini said. “I do think students should participate because four years from now, you’ll be inheriting whatever this president does. But it’s hard because there’s a lot of anger on all sides.”