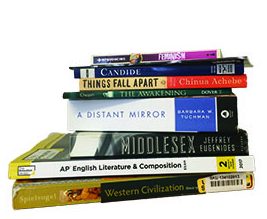 Purchasing required texts on top of school supplies and uniforms can result in a pricy back-to-school receipt, which has students finding other ways to go about acquiring textbooks.

“My first move once I get the book list is to see if anyone I know has the books I need so that I can get them for much cheaper prices,” senior Ana Paula Louie-Grover said.

Louie-Grover says she prefers to see how much use she will get out of a textbook before making a significant investment. Since she purchased expensive books that weren’t deemed as “worth it” in the past, Louie-Grover feels less inclined to buy the pricey textbooks right away.

Sixty-five percent of college students, the group for which data is most readily available, decided to forgo purchasing a textbook due to its unreasonable price, according to Fixing the Broken Textbook Market, a study conducted by U.S. Public Interest Research Group.

“If you purchase a textbook full price then the investment is not necessarily worth it,” Louie-Grover said. “I’m less inclined to buy a more expensive textbook because the case may be that I don’t really need it.”

Some students are more likely to download the PDF of a book before buying a hard copy, according to Louie-Grover who used two hard copy versions of texts assigned in her English class last year.

“You can get certain books as a PDF and I’m more likely to use those than tangible books,” Louie-Grover said.

Many required texts can be found posted in the Facebook group Convent Clothes, which functions to allow girls to sell used clothing, electronics and textbooks to each other for discounted prices. Some English teachers, however, discourage their students from purchasing used books with annotations by former students.

Other instructors place emphasis on students purchasing the same edition of the book down to the International Standard Book Number, also known as the ISBN, and these specific texts can be more difficult to locate.

“I’m gonna be honest and say I spent a lot on textbooks,” freshman Sunny Stewart, who purchased all new books, said. “A couple of them were over $100, some closer to $200 — and that was a little bit ridiculous.”

The math department takes the opposite approach and suggests purchasing the oldest available edition of the book in order to save money.

“Textbooks are absolutely a great investment,” math teacher Jordan Lewis said. “They’re the best way that a student can practice math and get better, but they’re definitely not worth the ridiculous prices.”

Textbooks can serve as an alternative resource for students who do not immediately understand the curriculum as it is explained in the classroom, according to math teacher Chris Person-Rennell.

“Because I use the textbook as a secondary resource instead of a primary resource, I don’t want my students to be spending the extra money on a book they’re only going to be using incidentally,” Person-Rennell said.

In an effort to make the required materials for his class cheaper, Lewis experimented with using five dollar workbooks instead of textbooks, but found that textbooks were much more helpful and aligned with his curriculum.

“There weren’t as many problems as I had wanted and they weren’t as in depth,” Lewis said. “But that’s still an option that I’m exploring, so I’m flexible.”