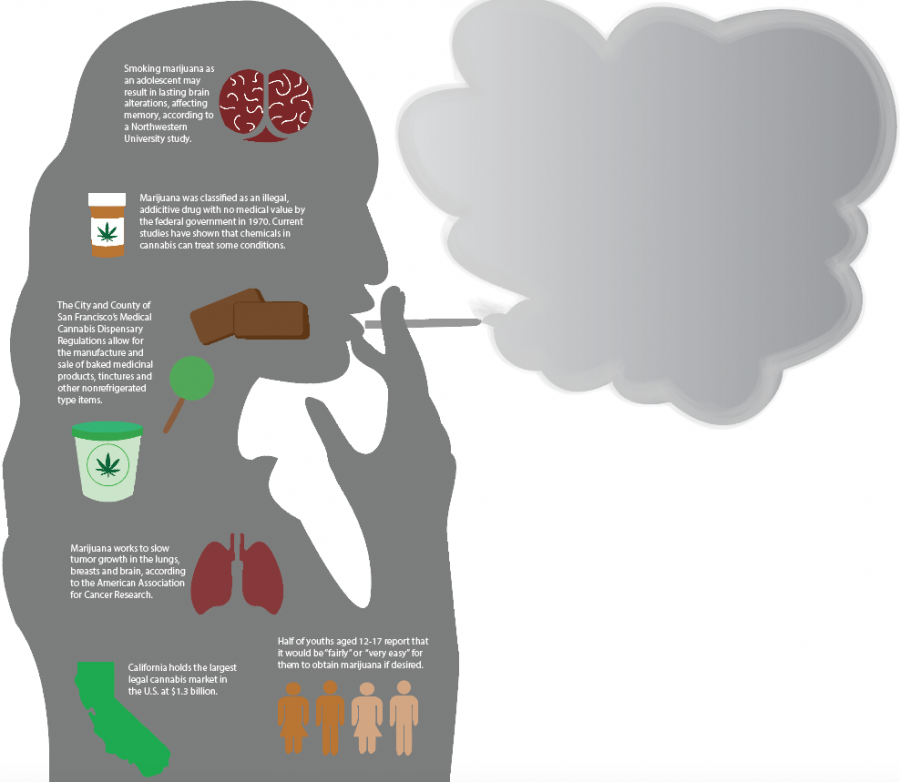 Medical use of marijuana relieves pain while legalization of recreational use may present less concerns for safety.

The legalization of medical marijuana in California has lead to increased access to dispensary-distributed cannabis products, and authorities have begun questioning teens’ intentions for buying this drug for medicinal purposes.

Patients with health conditions such as cancer, chronic pain, muscle spasms, seizures or other limiting symptoms are automatically qualified for a medical marijuana identification card (MMID), according to the San Francisco Department of Public Health.

“There are multiple options for me, and medical marijuana is one of them,” a student who asked to remain anonymous and is qualified for an MMID due to an epilepsy diagnosis, but does not have a card, said. “The best alternative would be brain surgery, and I’m holding that off for now.”

In order to have legal access to medicinal marijuana and an MMID, county law requires that the student, like all minors in San Francisco, have parent signatures and referrals from their physicians in order to obtain an MMID.

The student, who has used marijuana recreationally in the past, does not have her parents’ permission to apply for an MMID, as they would prefer she undergo the brain surgery which has a proven high success rate.

“In the back of my mind, I’m always wondering ‘Oh, am I going to have a seizure?’ because I have them all the time, and I can’t stop them,” the student said. “I notice that when I’m smoking, I’m a lot less paranoid about when it’s going to happen.”

Evidence from multiple lab research studies concludes that while cannabis is not consistently effective in treating seizures, it results in considerable improvements in seizure frequency when used by children with epilepsy diagnoses, according to the Epilepsy Foundation.

The two common components of medical marijuana, tetrahydrocannabinol (THC) and cannabidiol (CBD), have different properties and are used to treat different symptoms. Marijuana with high levels of CBD will not give users the common high that THC is known for inducing and can also counteract commonly THC-induced psychotic paranoia, according to HealthMJ.

“Weed does not have the same effect on me that it does on others because of my condition,” the student, who uses marijuana to relieve post-seizure pain from convulsions, said. “When I smoke, everybody else seems totally high and I feel mostly the same. I feel a little bit of a buzz which is mostly a sense of calm.”

Different levels of THC and CBD work differently to slow growths of oral, lung, liver and blood cancers, as well as leukemia, but both are equally effective breast cancer treatments, according to Molecular Cancer Therapeutics.

There is evidence that both THC and CBD work to slow the growth of brain cancer as well, according to The Journal of Pharmacology and Experimental Therapeutics.

“Somebody who is suffering from chemo who has no appetite whatsoever, who is just wasting away, is told to eat more, and they can’t keep anything down,” biology teacher Marisa Orso, who teaches a unit on medicinal marijuana in her physiology class, said. “With medical marijuana, the side effect that gives people the munchies, all of a sudden now that can be used medically, and sure enough it causes them to have an increased appetite, and it’s actually a great help.”

The student’s current medications work to prevent seizures on a timed basis and stay in the bloodstream for 12 hours, meaning that when a pill is missed, it is more likely for a seizure to occur.

“The medications I use now cause nausea and headaches and side effects like that,” the student said. “I’m allergic to a lot of medications, which limits me in my options of the medicines I can take.”

Marijuana has been identified as an analgesic, so it is capable of relieving pain from headaches to much worse, according to the Institute of Medicine and the Governing Board of the National Research Council.

“I get a lot of pain after seizures, mostly headaches and body aches if I convulse,” the student said. “The use of marijuana as a medicine would help that, and it would actually eventually reduce the amount of seizures I would have.”

The side effects of marijuana offer medical benefits, but most of it involves smoking it, according to Orso.

Most dispensaries in San Francisco sell an array of cannabis products including topical products, edible chocolates, infused honeys and butters, gummy candies, pretzels and glazed nuts and marijuana in an extensive selection of strains, according to WeedMaps, a web directory that catalogues the menus of each dispensary.

“There is no correlation that legalization leads to increased use of marijuana,” Armando Gudiño, California Policy Manager at the Drug Policy Alliance’s Los Angeles office, said. “The important thing for us is that by making it legal, we make it safer and less accessible.”

Teens who obtain their drugs illegally — whether for medicinal or medical use — are more vulnerable to marijuana laced with other drugs, according to Gudiño.

“Marijuana flows freely in the streets of inner cities from criminal organizations like local street gangs or cartels,” Gudiño said. “When you go to these dealers, you go to somebody whose sole purpose is to make money off of you, and often times these are nefarious characters who might take advantage of you.”

Teenage customers prefer to buy from a dispensary because their product will come with a label, according to another anonymous Bay Area high school student, who uses marijuana occasionally.

“The label lets you know what you’re getting,” the student said.

California regulations for medical cannabis products require they are packaged and labeled with clear warnings about the product’s intoxicating capabilities including a complete list of pharmacologically active ingredients and their amounts as well as how the amounts pertain to the servings per package.

“Purchasing marijuana legally through a dispensary is safer,” the student said. “It’s also not as scary as buying it from a suspicious dealer who could have laced it with who-knows-what.”

The medical marijuana program that exists today was legalized in 2003 when Senate Bill 420 was enacted in California.

“Medicinal marijuana is not a cure,” the epileptic student said. “But, it’s a good way to take care of my system.”