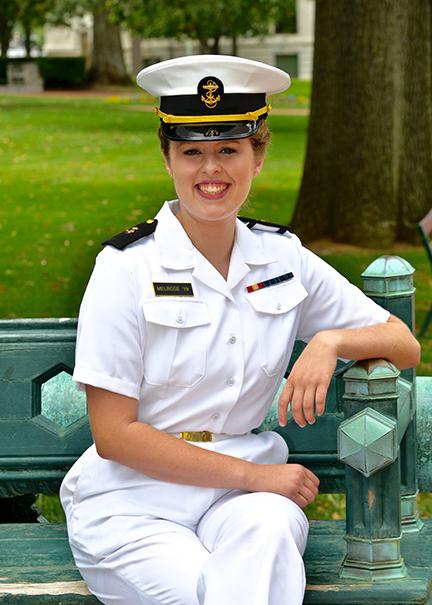 As her alarm goes off at 5:30 a.m. each day, Maya Melrose (’15) climbs out of bed and into her clothes for an early morning workout, knowing that she must be back on deck ready to start the rest of her day in an hour.

Melrose does not live on a boat, but is a Fourth Class Midshipman, also known as a plebe, at the U.S. Naval Academy in Annapolis, Maryland, where everything in her life is treated as if she is at sea.

“Initially, when considering colleges, I didn’t think about the Naval Academy at all,” Melrose said. “But when I was a junior, I got a letter in the mail from the admissions team saying ‘Hey, come to an aircraft carrier to see what the academy is like.’”

Melrose initially did not want to go, but attended after being encouraged by her mother.

“The event was held in Alameda on the USS Hornet, a museum in an aircraft carrier,” Maria Melrose said. “Navy put on a huge show. Maya and I sat with mouths open the entire time. I put on my best poker face, pretending not to be impressed — but Maya was already 100 percent hooked.”

Maya Melrose said community service during high school helped her realize that helping others made her feel like a better person, and was a manifestation of the leader she knew she someday wanted to be.

“After talking to some of the midshipmen and hearing what they had to say, I felt that my resources as an individual would be best utilized through military service,” Melrose said. “The Naval Academy provided me with the opportunity to have a great education as well as the chance to grow and inspire others.”

Life on deck is fast-paced and high energy, according to Melrose. Days are filled with brigade formations, college classes, required sports practices, quizzes from upperclassmen and extracurriculars. Midshipmen also attend “briefs” in the evenings where they hear from astronauts, politicians and other outside speakers.

“You take every minute you have to do something,” Melrose said. “As a plebe, I’m not allowed to watch TV or movies, or listen to music, or anything like that — which means that I’m 100 percent focused most of the time. It’s definitely tiring, but working together with the 37 other people in my company, we work really hard and get it all done.”

Classes and teachers at Convent influenced Melrose’s decision to apply to the academy, especially ethics, government and U.S. history, and the support of Norman Luna, Michael Steinbrecher and Paul Pryor Lorentz who helped her in the process.

“In observing Maya, she seemed like someone who had the internal drive to be able to handle the constant challenges of attending a service academy, especially during her plebe year, which is unyielding in its pressures and expectations,” government and politics teacher Luna said.

After graduation, the midshipmen join either the Marine Corps or the Navy as a second class lieutenant or an ensign, where they must serve at least five years on active duty.

“Everyone hypes you up a lot at the beginning and gets you really excited to be a part of the brigade,” Melrose said. “But then they hit you on Initiation Day, and make sure you know that you are the bottom of the totem pole.”

Students who first arrive at the academy are subjected to the rigors of “Plebe Summer,” an intensive seven-week program designed to challenge the midshipmen both mentally and physically.

“I guess I wasn’t expecting to feel like such a failure,” Melrose said. “They take away all the things you worked hard for in high school, and then you just have to focus in on the things that you value and who you want to be.”

Melrose says learning from mistakes and caring about those around you are the most important lessons to learn in order to succeed at the academy, where the physical and emotional strength of the midshipmen are challenged daily.

“I’ve definitely doubted what I am doing many times,” Melrose said. “But at the end of the day, I wouldn’t trade it for the world. The leadership opportunities I’ve had and the way I’ve progressed as an individual are way more than I could get at any other college.”