Volunteering with inefficient groups, lack of skills may not be beneficial to people who are "served." 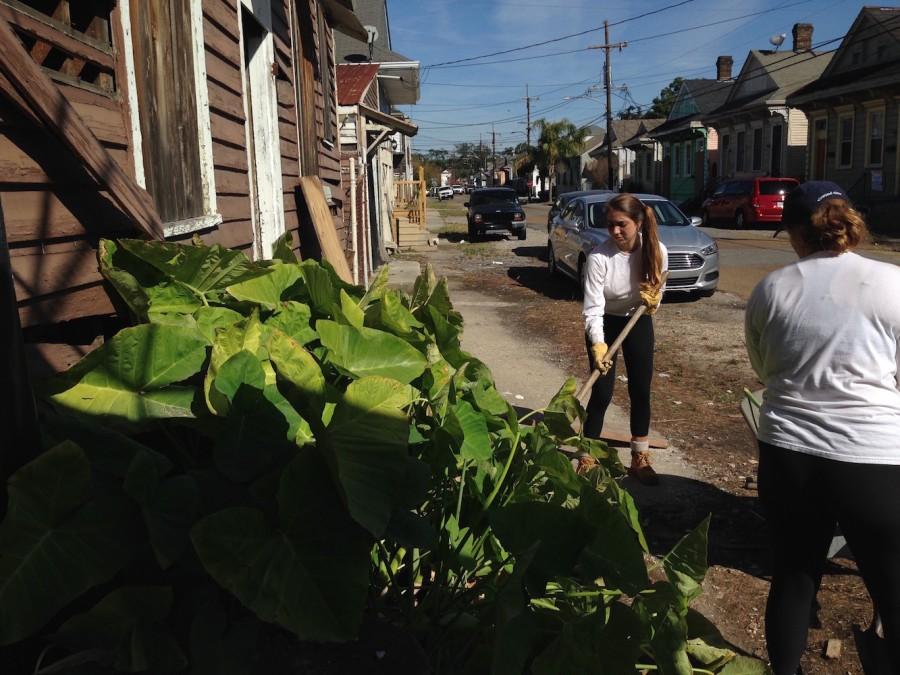 Senior Lily Ross works alongside peers on a service trip to New Orleans, shoveling debris from a house they were demolishing into a nearby dumpster. Ten students from the high school division attended the weeklong annual New Orleans Service Immersion Experience trip, staying with nuns at a local sisterhood while volunteering with multiple local organizations in 2014.

Volunteering in a distant community in need may seem like a noble act, but such trips can be detrimental to those “receiving” help when the volunteer lacks skills that the community needs or the sponsoring agency does not create lasting impacts.

“A lot of people are a lot more willing to spend money on something if they can go see it,” Pippa Biddle, board vice president of  Onwards, a nonprofit which aims to reduce poverty through socially-responsible tourism, said. “If you’re young and looking to create an impact, any organization that leads with volunteering as their mission is worth examining critically. If they are purporting to do development work, their primary goal should be helping the community, not hosting volunteers.”

Biddle says it is best to work directly with an organization within the community as many coordinators of volunteer trips represent for-profit companies with the priority of making money — which isn’t always aligned with creating long-term change.

Conversely, participants ​on the​ annual New Orleans Service Immersion Experience work with a number of ​local organizations. During this year’s trip, which will be from Feb. 13 to 19, volunteers are collaborating ​​with Farming New Orleans​, a nonprofit that turns abandoned land into community gardens​ in economically depressed areas​.
“What happened​ in a place like New Orleans ​after Hurricane Katrina in 2005​​ was driven by volunteer initiatives,” ​​Ray O’Connor, who has directed and chaperon​ed the high school trip for six years, said. “The economy was devastated, so​ part of​ our work i​s​ demolishing and rebuilding homes ruined by the ​hurricane so they can be occupied again.”

With knowledge of the community’s needs, CSH and SHHS volunteers learn how to use power and repair tools during a training day, ensuring they are performing tasks that could not be accomplished without the volunteers, rather than taking jobs away from the local community, according to AlmostDocs editor Michelle Lynn Stayton.

“In New Orleans, we saw a notable difference as people driving by would honk or come up to tell us the impact we had done,” senior Angie Scott, who attended the trip in 2014, said. “We provided support, but we were really trying to jumpstart more people to participate and help out.”

Similarly, Morgan Kendall (’08) took skills she learned in medical school to Mwanza, a town in Tanzania, when she brought portable ultrasounds to a women’s clinic and taught health professionals there how to operate them.

“We definitely wanted it to be sustainable, and an important part of that is teaching something that students there can use to make a difference,” Kendall said. “We weren’t butting in but offering a supplement and helping with what the clinic already offered. By teaching health providers, even when we left, there would still be something valuable that had been passed on.”

Volunteers should focus on development via economic investment, whether through donating money or participating in an adopt-a-village program, and not physically going to the country, according to Biddle.

“When I was in high school, I really wanted to make an impact I could see, but the reality is that you’re not an engineer or a doctor,” Biddle said. “Development professionals spend years trying to learn how best to help before breaking ground on a project. To assume that, as a young person without specific skills in the field, you’ll be able to have a huge positive impact in just one week, is a little presumptuous.”

Although unintended, many short trip volunteers can end up doing more harm than good, causing abandonment issues when working with children and not staying long enough to realize their ineffectiveness, according to Stayton.

“Onwards gives microloans to local entrepreneurs, so they can create their own tourism-based businesses,” Biddle said. “Then, during our trips, we rely on those businesses, and this fuels the economy. By focusing on a community economically, you can still travel, but your impact is deeper and empowers the community to address problems internally, rather than relying on more traditional external aid.”

This continued development of skills within that community can create long-term solutions, according to Biddle.

“Good things can come from these trips if people use them as a catalyst for good in the future, as long as it isn’t at the expense of the local population,” Stayton said. “Don’t forget about it once your Facebook pictures get old.”