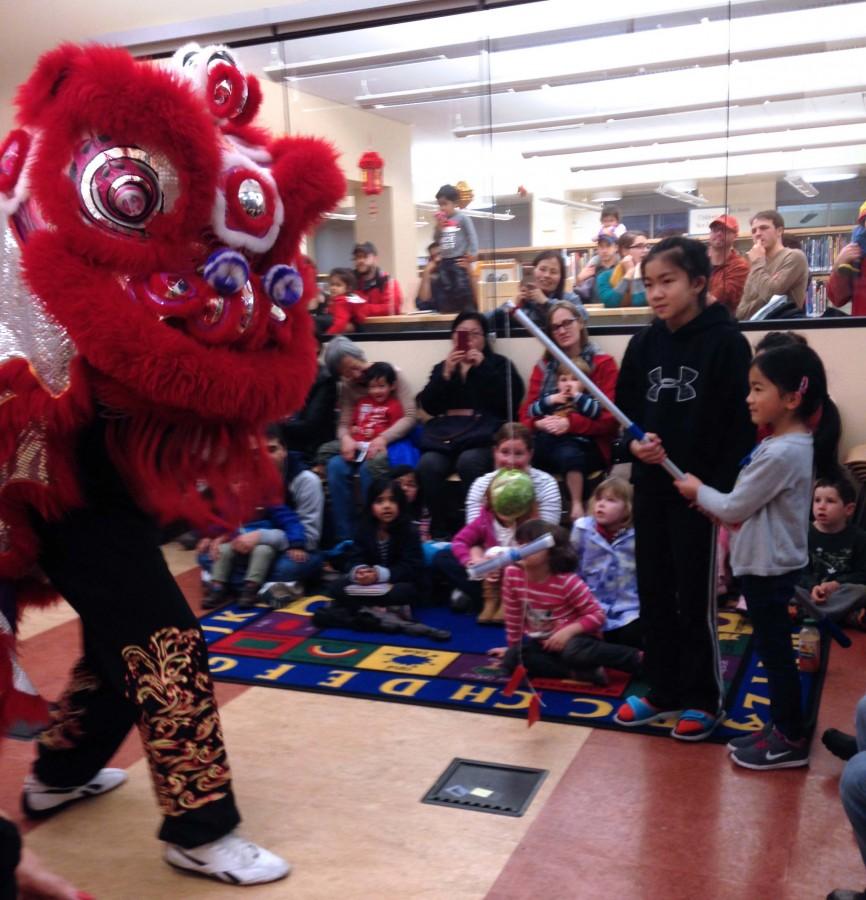 Two girls feed cabbage to a lion dancer from the Jing Mo Athletic Association during a performance at the Glen Park Public Library. The martial arts group performs lion dances at the library annually.

Most Americans return to work or school just days after Jan. 1, but for Asian cultures following the Lunar Calendar, New Year’s celebrations have not even begun.

“We celebrate the New Year Jan. 1, but Lunar New Year is when we go all out,” Jane Lee, who teaches Korean language and culture at Claire Lilienthal Alternative School, said.

Lunar New Year, which falls on Feb. 8 this year, is widely celebrated in San Francisco because of the high Chinese demographic in the City, but in other places without a large Asian community, the cultures who celebrate the holiday may be more obscure.

The Chinese New Year parade in Chinatown, which will take place on Feb. 20, attracts about one million people from around the world to celebrate the holiday as a community, according to Karen Eng, Public Relations Director of the Chinese New Year Festival and Parade.

“It’s a very family-friendly event,” Eng said. “It’s good for the children because it’s a big cultural tradition that they all look forward to, and they’ll never forget it.”

The parade, started by local Chinese communities in 1958, features a dragon dance with a 100 foot-long golden dragon, lion dancers and fireworks, with over 100 groups and 5,000 participants. Other cultures that celebrate Lunar New Year are often overshadowed by the celebrations of Chinese New Year in the City, which attract so much attention.

“The Lunar New Year is, when you first think about it, automatically referred to as Chinese New Year,” Lee said. “It’s only if you have some understanding of the Asian cultures that you realize Lunar New Year applies to any country that uses that calendar, and that’s pretty much all the Asian countries.”

Many Asian countries consider Lunar New Year to be the most important holiday, according to Lee. Korean New Year, known as “Seollal” or “Seolnal,” takes place on the same day as Chinese Lunar New Year, but is celebrated with customs unique to Korean culture.

Koreans who celebrate the holiday eat traditional food like “ddukguk,” or rice cake soup and dress up in “hanboks,” traditional Korean clothing. Children bow to their elders in a customary Seollal practice called “saebae” and receive money.

“The tradition behind that is wishing them the best, and their way of wishing you the best is to give you a token,” Lee said.

“Teh,” the Vietnamese New Year, emphasizes the importance of family. Celebrators dress up in their best and eat “thit kho tau,” a pork stew with ingredients that symbolize different elements such as health, wealth or peace. Children receive good luck money in red envelopes called “li xi.”

“It’s a really big holiday about family and spending time with them,” Cindy Vo, who celebrates “Teh,” said.

The three celebrations all emphasise family, cleanliness, eating, dressing up and good luck money. For Asian families in the City, it is a time to come together and usher in the New Year.

“It’s a time of family that you might not see all year long,” Lee said. “That one time is when you will gather together, to reconcile and tie loose ends.”