Sexual harassment prevents women from breaking through the glass ceiling 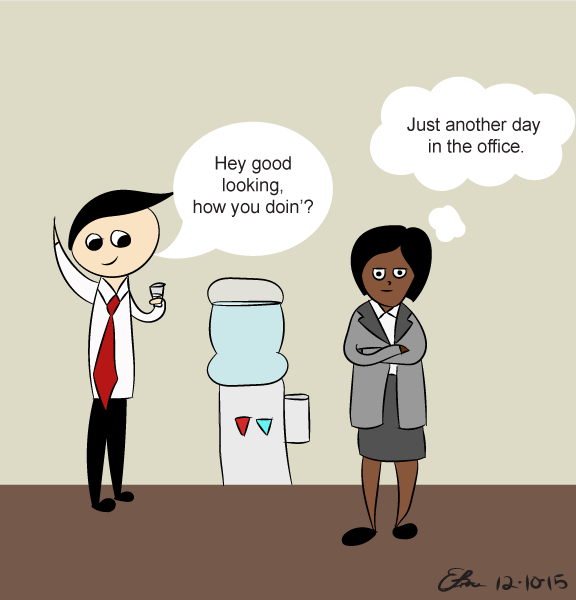 Even though women have made strides in many areas of the workplace, breaking the glass ceiling is made even more strenuous by sexual harassment in working environments, creating tremendous difficulty and setbacks for many women striving for success.

One in three women has experienced a form of sexual harassment at her place of employment, according to a Cosmopolitan survey of over 2,000 working women.

Occurring in many traditionally male dominated fields and STEM occupations where women lack adequate representation, workplace sexual harassment can include offensive comments, requests for sexual favors or physical contact of a sexual nature that affect the victim’s work habits and create a hostile work environment, according to the U.S. Equal Employment Opportunity Commission.

In order to prevent more women from falling victim to workplace sexual harassment, working women must band together to support and encourage one another to take a stand, instead of creating an isolated environment for their female coworkers.

Without womanly support and prevention, women who are exposed to sexual harassment at work can risk facing depression, anxiety and a loss of passion in their occupation, according to Workplace Answers.

Due to differences in the treatment of both genders in the workplace and a lack of many female role models, women are often discouraged from entering jobs that are traditionally associated with men, according to the Business and Professional Women’s Foundation. If more women avoid these jobs, the gender gap will continue to widen, keeping women beneath the glass ceiling.

Often being the minority in male dominated fields, women can feel inhibited from reporting instances of sexual harassment by a coworker or superior employer. Only 29 percent of the women report harassment, according to the Cosmopolitan survey, allowing the perpetrators to continue with the mistreatment of women in the workplace.

Despite the fear and sense of inferiority a workplace harasser may instill, an employed woman’s integrity and self worth must be protected. Experiencing  workplace harassment is not a situation that should be taken lightly or disregarded as insignificant.

Although victims should ideally bring their experiences and feelings to the attention of someone who can make a change in their mistreatment, we must stand together as women and provide support when they are unable to speak up in order to alter how women are treated in the workplace.

If we don’t, nothing will change.