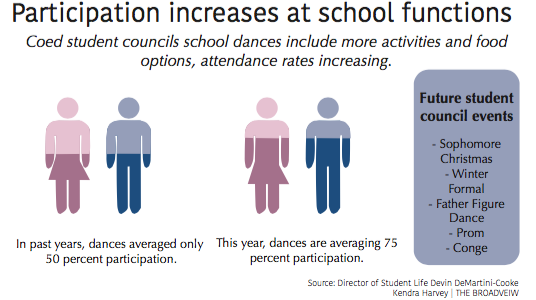 More hands-on activities, serving popular foods and heightened communication between both schools’ governments is being credited with increased participation in coed activities between CHS and SHHS.

The “Fright ‘Knight’” Halloween Dance had a nearly 75 percent participation from the combined student body. In terms of social events, dances generally receive around 50 percent, according to Student Life Director Devin DeMartini Cooke .

“The majority of the spike in dance attendance can be attributed to the sheer energy behind the promotion of the dance,” Michael Tellini, Stuart Hall Student Body President, said. “Everything from the In-N-Out burgers to the haunted house to even having a student DJ all led to such incredible numbers.”

The CSH and SHHS Executive Student Body Councils are meeting twice a month to plan coed events, including dances.

“There has been a really positive collaboration between Convent and Stuart Hall, especially in terms of the junior-senior leadership,” DeMartini Cooke said. “I think that the way that the way the students are working together has a allowed for more publication of events and just a general sense of camaraderie that makes the events more fun and less stressful.”

Tellini credits faculty leadership for the rise in student participation.

“Mr. [Austin] Emerson and Mrs. DeMartini Cooke have done a good job making sure that the students have the freedom to come up with their own ideas,” Tellini said. “They have also been able to provide real advice on implementation of ideas.”

Student Body Councils are currently planning events such as Winter Ball, Prom, Congé and  barbeques for the school community, according to Student Activities Director Austin Emerson.

“The student leadership has done a really good job of working together and really feeling like one school at some times,” DeMartini Cooke said. “Allowing students more time to meet, and even the collaboration period changes the feel of the day. Having the period in the morning allows people to get their homework done, so they can attend events after school.”

Both CSH and SHHS will plan future coed events, according to Emerson.

“We have worked on promotional videos together,” Tellini said. “In the collaboration and working on the videos, the idea of what each dance ideally would be was conceived.”

The next co-event will be Winter Formal at CHS on Jan. 8.

“We have put a lot more passion into it,” Emerson said. “I feed off of the students, and they are all excited about this year.”