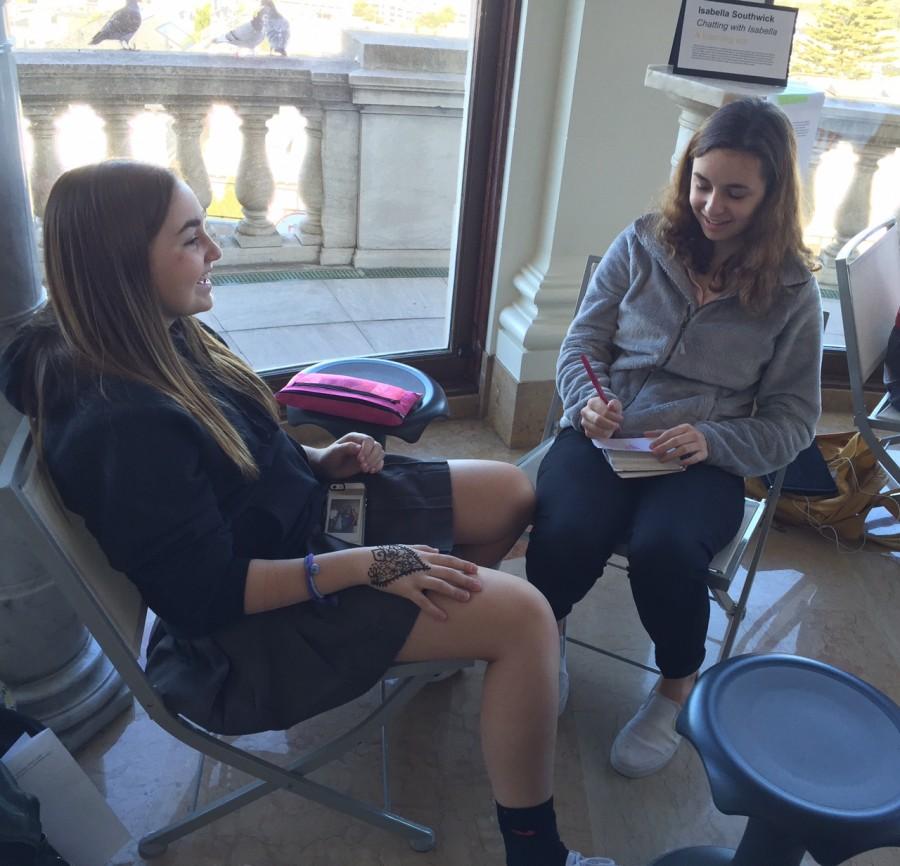 Freshman Megan Mullins talks to junior Isabella Southwick at Southwick's booth. The booth allowed participants to discuss a topic of their choice and Southwick provides a drawing.

Participants of the “Beauty of Knowledge Salon” visited different student run booths during Collab that offered a variety of services including advice, body art and urban foraging.

“My booth is about giving someone an opportunity to talk in a safe environment,” junior Isabella Southwick said during the event. “I am providing a listening ear an in return for the person’s trust. I’m providing a small drawing about what they were talking about or what mood they were in.”

The event was hosted by Advanced Portfolio one, two and AP Studio Drawing.

“Each year with the advanced class I like to introduce the idea of art as social practice and do some type of public component,” art teacher Rachel McIntire said. “We started talking about what was important to us as far as what we value, and if you were going to set up a salon, what would you want to offer and what would you want in exchange for what you offered.”

Nine different booths offered a range of services from information to nail painting.

“They were all really different and really interesting,” history teacher Michael Stafford said. “I really liked Amanda’s because she asked me about what was on my mind and then she just talked. It was a little anecdote that brought my nervousness, anxiety or fear to a different place, it brought it to a place of calmness.”

The idea of the salon was inspired by some on Cassie Thornton’s works which specializes on the theme of beauty salons, according to McIntire.

“She dealt with a lot of things around exchange and the idea of beauty so I invited her to come work with the girls,” McIntire said.

Services focused on inner beauty and combinations of inner and outer beauty, according to Southwick.

“We’re really trying to portray that knowledge of some sort is really beautiful,” Southwick said.

The different booths that were offered included The Science of Beauty, Monologues to Massage You, Urban Foraging, Literature and Tea Recipes to Entice, Henna and Floral Tattoos to Save the Planet, The Ultimate Icebreaker, Beauty of Breaks and Bruises, A Listening Ear and The Illusion of Grades in Nail Art.

“We opened it up to the students,” McIntire said. “We planned for it to be for today, but if they want to continue it either here or in the art studio, they are welcomed to.”