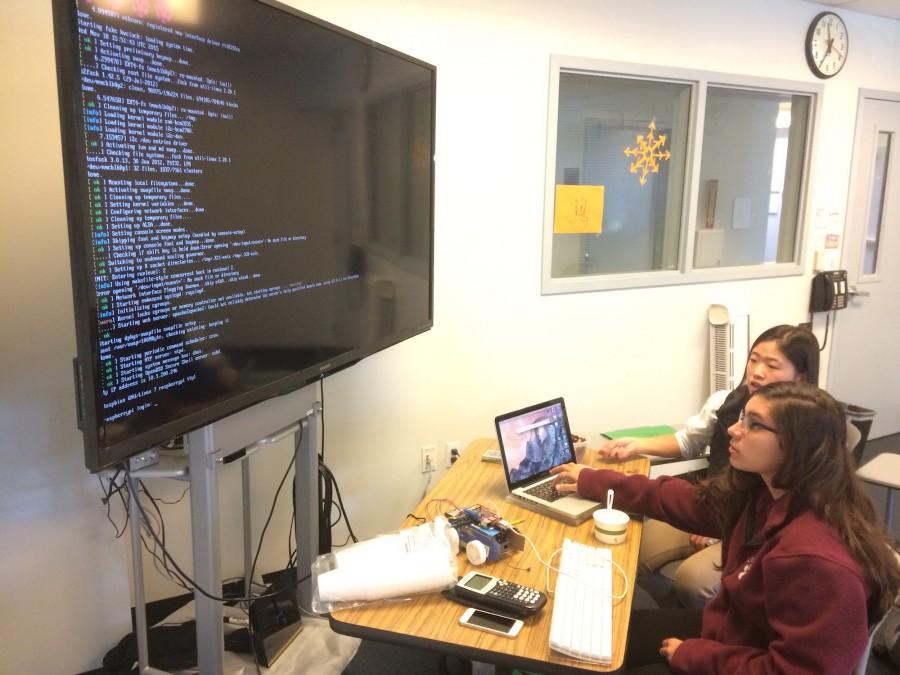 Sophomores Halie Kim and Carlota Rubio analyze code developed for their self made cars.

Innobotics Club met during lunch to finalize self-built cars for their race tomorrow in the Main Hall.

The club, which meets on Wednesdays, creating their cars using small computers and 3D printed wheels, with code created to mobilize them.

“We’ve been building them for the past couple of weeks,” club member senior Catherine Heinen said about the robotic cars. “We coded them to work wirelessly from a computer to make them go, turn right and turn left.”

During today’s meeting, final preparations were finished for the race.

“It is our first public display of our creations,” club leader Sarah Paulsen said. “Today we are finishing our cars and practicing driving them for the race tomorrow.”

The goal is to make each car move wirelessly through written code. The cars each have a Raspberry Pi, a small computer that can connect to the internet and run code written by club members.

“Each Raspberry Pi has to operate as its own independent server,” club facilitator Chris Person-Rennell said. “I’m installing Apache, a web server, and I’m setting it up so we can execute scripts on the server when we connect to it from the client side.”

Each group of two or three club members test drove their cars, working to create a seamless car to be driven in the race.
“The main goal of the club is to give an opportunity for exploration and innovation of electronics,” Person-Rennell said. “Building, planning, computer programming, you name it. We want to do it.”