Shattered glass, stolen items on the rise in San Francisco. 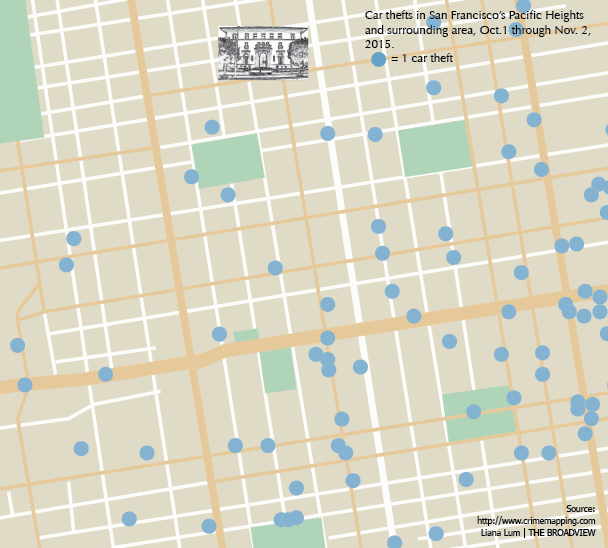 When sophomore Sophia Davari returned with her father to their parked car on Howard Street in the Financial District, they were met with shattered glass and not with the backpack Davari had left in the car containing her homework, laptop, Beats headphones, iPad, wallet and watch.

“We saw an SF police officer walking by, and we asked what we could do,” Davari said. “He said there was no way to find stuff that was stolen, and it was probably in the Tenderloin by now, so there’s no chance.”

The number of vehicle break-ins in San Francisco are on the rise, with over 500 reported thefts — since the beginning of October – according to SFPD CrimeMAPS. Auto break-ins have spiked 47 percent in the first half of this year, and have seen an over 200 percent increase since May, which saw 160 thefts.

“We’ve seen an absolute explosion of auto break-ins,” San Francisco Supervisor Scott Wiener said in an interview with SFGate. “There are areas in my district where you’ll have 10 cars on a single block that have been broken into.”

Some officials attribute the rise in auto burglaries to AB109, California’s Public Safety Realignment Act of 2011, which places those convicted of theft in local instead of state jails, and to Proposition 47, which reduces nonviolent crimes from felonies to misdemeanors statewide.

With California’s property crime rate decreasing, others claim the city’s declining resources, lenient court system and widening income gap are to blame. Proving a case is also difficult, requiring a witness or circumstantial evidence, according to Alex Bastian of the San Francisco District Attorney’s Office.

Victims should immediately call 911 if thefts are in progress or if they happened within the last five minutes, according to the San Francisco Police Department.

“My mom did call 911 because she thought it’d be a threat,” senior Laurel Cinti, whose mother’s car was broken into twice, said. “We were in a bad neighborhood and the robbers used force to break-in, but the police did not respond.”

Victims may alternatively file an online police report for vehicle burglary, which asks for information such as details of property stolen and whether vehicles were locked and windows closed. An officer will contact them and verify reports in one to three business days.

“We see a lot more cars now,” Nelson Chen, who works at Secureway Auto Glass, said. “The damage is usually on the small, rear glass mirror, and most people pay out of pocket.”

Insurance coverage depends on the driver’s plan and is determined on a case-by-case basis. Davari says she was able to get a new iPad, but her Beats and laptop were not covered.

“We called our insurance to see what they could do, and they basically said, ‘Sorry, there’s nothing we can do,’” Cinti said. “We weren’t refunded because they can’t prove we had stuff in the car.”

The San Francisco Housing Authority advises drivers to park their cars in a well-lit areas. Belongings should be out of sight or placed in the trunk prior to parking, to avoid experienced thieves who are often on the watch for valuables, according to Nationwide Mutual Insurance Company.

“I never leave anything in the car anymore,” Davari said, mentioning that a covered bag with her father’s iPad, placed next to her backpack in the car, was not stolen. “I’m much more cautious of where put things and where I am with my belongings.”