Shakespearean play to open next Thursday 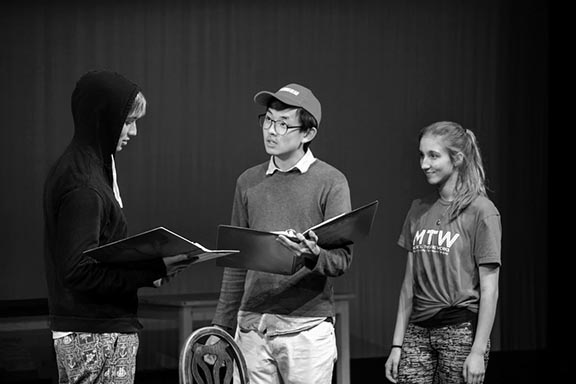 Seniors Duncan McDonell, Daniel Im and Catherine Heinen (from left) read their lines during a rehearsal for the school production of “The Tempest”. The set features intricately designed lighting schemes and complex projections to add to the play’s aura of mystery and magic.

Forgiveness, love and mystery converge onstage in the fall production of Shakespeare’s “The Tempest.”

“This play never gets old,” director Pamela Rickard said. “Although it was written several hundred years ago, its message of forgiveness and realizing that violence does not make wrongdoings right is ageless.”

The story centers around Prospero, played by Stuart Hall senior Daniel Im, a man banished to an island by his jealous brother, and the revenge that he seeks for the injustice he has experienced.

“Because Shakespeare is such a well-known playwright, each time you perform any of his works, you have to think a lot about how to make it fresh and interesting,” sophomore Francesca Petruzelli, who plays Iris, said.

Much of the set is created by lights and projections, to set the tone of magic and mystery, according to stage manager Kelly Rosanelli.

“This is definitely not your average Shakespeare production,” Rosanelli said. “We have some slightly abstract creations in our set design, and the actors are doing a great job of imagining the whimsical world the crew is creating.”

Convent & Stuart Hall’s production of “The Tempest” is abridged, a practice common in high school performances, because some monologues and other sections are too long to be realistically memorized by the actors.

“The hardest thing about performing any of Shakespeare’s plays is the language,” Petruzelli said. “When the audience doesn’t necessarily know what the words mean, it is the actor’s job to use their voice and body language to convey it.”

Tricia Cronin, who is new to the school this year, created the movement direction for this production, which is less about dance and more about setting the mood for the play, according to Rickard.

“The choreography is fresh, new, and fits with the subject matter very well,” Rickard said. “Our music, which goes hand in hand with that, is also amazing. Composed almost entirely by Paul Pryor Lorentz, it adds an element of depth, mystery and excitement to the whole affair.”

Shakespeare was written to be performed, not read, so the choreography, music, and lighting in addition to the work of the actors help to tell the story for audiences, according to Rickard.

“‘We are such stuff as dreams are made of,’” Rickard quoted from the play. “It just perfectly sums up the entire message. Prospero talks so much about forgiveness and change, and there’s a profound message there that everyone can see if they just look for it.”