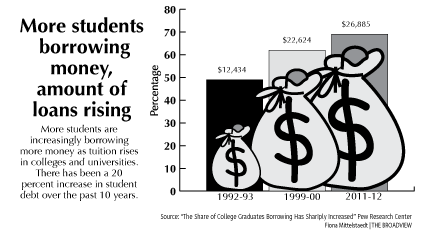 With the rising cost of college, applicants may want to step back from filling out applications and look to better understand finance in higher education.

Private and nonprofit colleges have experienced a 3.6 percent increase in tuition price from 2013 to 2015, according to the College Board, causing a rise in the number of students taking out loans.

“Students really have to be careful when they look at student loans because when you’re in high school, it may be difficult to wrap your head around the fact of taking out $10,000 a year, maybe $20,000 a year in loans,” College Counseling Director Rebecca Munda said.

American University sophomore Addie Schieber (’13) began paying off her student loans last year and has since worked out a payment plan, which should leave her with less than $5,000 in debt after she graduates.

“Talk to someone who knows what they’re doing,” Schieber said. “Most banks will talk to you. Also talk to your parents and have an open conversation, because they would know more than any graduating high school student would.”

Discussing finances with parents is pivotal to understanding a senior’s economic situation and which college would be the best fit for her financially, according to Munda.

The College Board has developed the Net Price calculator to estimate the cost of college by finding the difference between the price of the college and the grants and financial aid that students may be eligible to receive.

“I’ve looked into the Net Price calculator with my dad to see how much money I could potentially be offered by colleges,” senior Sophia Slacik said.

With the average student loan coming in at tens of thousands of dollars, students are not always aware of how long it will take them to pay off their loans, according to Munda.

Payment plans and safety schools should be considered during these conversations, according to Katy Murphy, Director of College Counseling at Bellarmine College Preparatory in San Jose.

“Students need to talk to their counselors about putting what I call a ‘financial aid safety school’ on their list,” Murphy said. “Under any circumstance the characteristics of that college will be what they are looking for, and the college would also be affordable.”

Private school tuition can fall anywhere between $50,000 to $60,000 a year which can be a huge amount to take on, according to Munda.

Using a student loan calculator can clarify the amount of debt an individual should take on based on salary and previous loans, as well as how much money one should make to stay on top of her loans, according to FinAid, an organization that counsels students and their families about financial aid.

Many colleges will be able to meet a student’s financial needs, so it is not worth taking out a large loan for an undergraduate degree, according to Murphy.

“It is okay if you are overwhelmed,” Schieber said. “It is a very overwhelming thing to think about owing money in the future. Let yourself be overwhelmed and get it out. The most important thing is to talk with your parents or whoever is supporting you financially.”