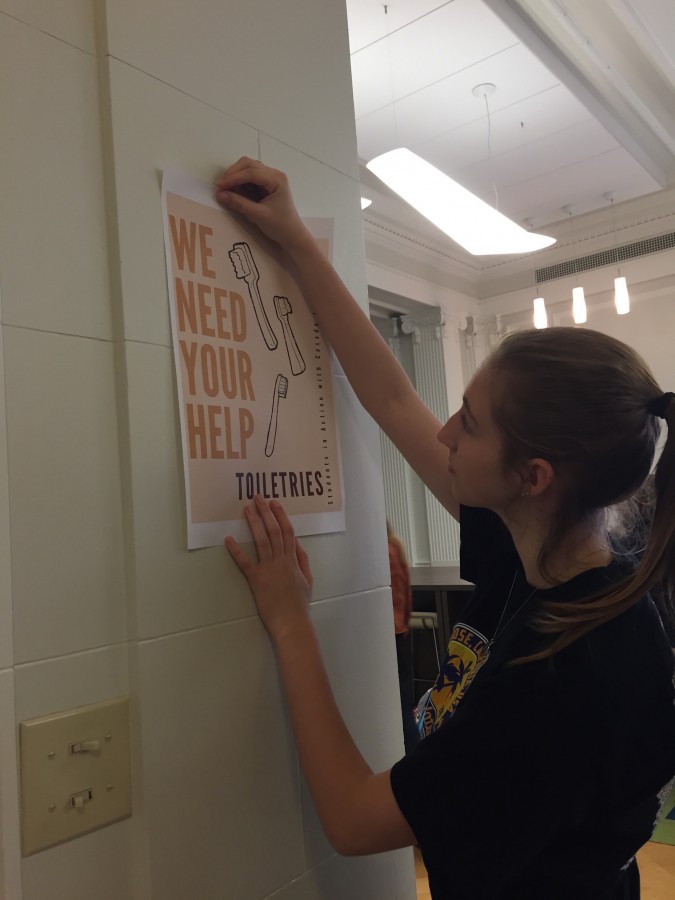 Senior Catherine Heinen tapes a promotional poster for the toiletry drive. Boxes are located in the library, gallery conference room and den.

Bin for toiletries are scattered around campus as SIA begins their drive for women in need.

“We are gathering materials to give to La Casa de las Madres, a non-profit group that helps people around San Francisco and the Bay Area with domestic violence problems,” SIA co-head Isabelle Armstrong said.

SIA is a nationwide organization promoting students to positively impact their schools, community and the world, according to the Students in Action website.

“I personally know friends who have been abused by an intimate partner. It’s something we need to talk about,” Armstrong said. “It is something that adults primarily talk about, but it happens to teens everyday.”

This is SIA’s first drive following the founding of Convent’s SIA branch. The drive will be held from Oct. 26 to Nov. 13, and students are encouraged to donate basic toiletries for women who are suffering or fleeing from domestic violence, according to Armstrong.

“I know family members who have been in abusive situations, and it can be difficult to get out of those, so I want to help,” freshman Isis Boivin said.

Students can donate toiletries by placing them in boxes located in the library, gallery, conference room and den.

“I went to the store, and I’m donating some shampoos, feminine hygiene stuff and soap, things the women will need,” Boivin said.