Learning through a new lens 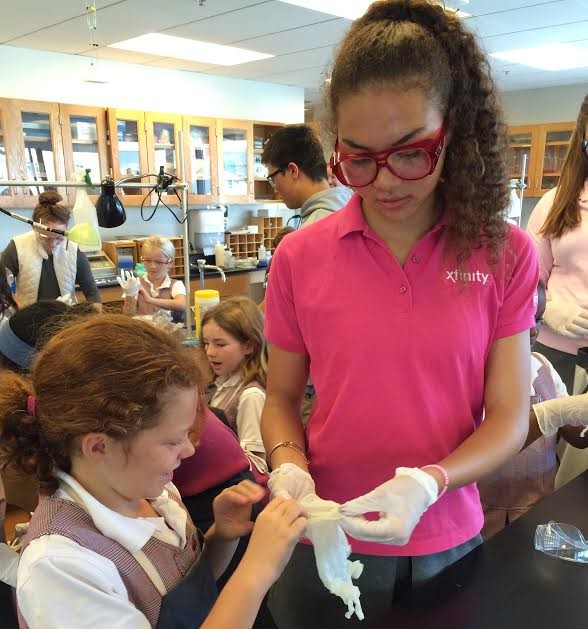 CES third graders put on their goggles and gowns as they prepared to cut away at a giant, slippery retina and iris.

“It’s gross but at least I finally get to dissect something,” Taylor Jones said.

“This gives us an opportunity to share not only the space but also our knowledge, as the high-school students are leading this,” science department chair Raymond Cinti said.

The third graders bring a new energy to the classroom, raising their hands for every question, according to Cinti.

A few of the physiology students, like junior Caroline Salveson, experienced the dissection as third graders, and now see it from the side of teachers.

“It’s a memorable thing that we’ve been doing for quite a while to the point where those third graders from Convent have come up into the high school and they clearly recall it,” Cinti said.

The dissection is a better alternative to taking a test, as students are demonstrating their knowledge by teaching the younger girls, according to junior Gia Monachino.

“For a test it may just be memorization,” Monachino said. “But for this you’re taking the words from the textbook and actually seeing it in real life.”

There is more than one take-away from the experiment for the girls, according to third grade teacher Zoe Scott.

“I hope that because it’s hands-on, they really remember it,” Scott said. “I think that they have fun, but they also learn a lot about the eye.”

The experience of helping younger students can be inspiring for the high schoolers, according to Cinti.

“You never know when somebody in the high school has such a cool feeling about helping someone out and the joy of teaching,” Cinti said. “It could actually alter their trajectory and somebody may want to be a teacher as a result of it.”

Third graders are not the only ones who benefit from the experience, as the high schoolers get an important leadership opportunity, according to Monachino.

“For the younger students, they have someone to look up to and it gives them a little confidence,” Monachino said. “But then for us it’s a great connection between the two schools.”