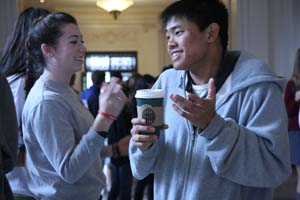 Nate Tom, SHHS Student Body President, chats with sophomore Kendall Scullion at Breakfast Club last Thursday morning. Students from both schools gathered in the Main Hall exchanging hugs and quick greetings before faculty herded them up the Marble Stairs to the Center where a few boys sold donuts and students chatted and listened to music.

Breakfast Club has evolved from a planned period of coed activities into less structured time for CSH students to spend with the boys from SHHS.
“Breakfast Club has changed so much,” said senior Kat Armstrong. “My freshmen year we were all divided into groups. Mine played cards and once attempted to make crêpes. I’ve also been involved with the instrumental music group.”
Students are meeting new people and enjoying the loose social time. Student Council is providing food on some mornings, an example being the Sophomore Class’s pancake breakfast.
“We stand around and talk,” said freshman Lotti Crawford. “I’ve met some guys, but I wouldn’t consider them really good friends. I like it because it’s a relaxed and comfortable environment.”
Juniors and seniors are not required to attend Breakfast Club, a new adjustment this year, but they are strongly encouraged. Freshmen and sophomores have noticed a decrease in attendance by the upperclassmen and are adjusting to the new set up, according to sophomore Kendall Scullion.
“I think there is potential,” said Scullion. “The administration needs to be more creative. They need to think like a teenager, and organize something that would be fun.”
Breakfast Club is changing for the needs of students, according to junior Farah Fouladi. She says making it optional for upperclassmen gives them a chance to catch up on work, while still leaving the choice of taking time to relax before class begins.
“Breakfast Club is great because it is so accommodating,” said Foudali. “It might be new but it gives the underclassmen to really interact with each other and gives us upperclassmen time to study up or just utilize that extra hour of sleep.”
The administration sees Breakfast Club a flexible time for socializing and relaxation according to Head of School Andrea Shurley.
“Some of the classes are meeting and there are a few specific groups like orchestra and choir, but for the most part it’s a time for building community with food and music,” said Shurley.
Even with the recent changes, Student Council is working to make Breakfast Club as appealing as possible, according to Student Body President Kelsey Vickery.
“It’s a time to hang out and meet guys,” said Vickery. “We’re always experimenting with new ways to make it work.”