Renovations aim to encourage the community's innovation and collaboration. 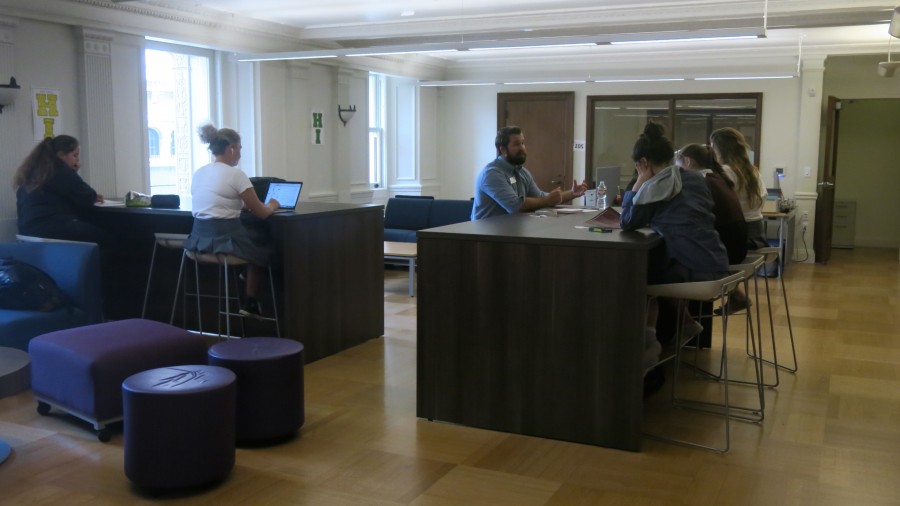 Juniors and seniors sit in the newly renovated Gallery on the second floor of the Flood Mansion. The floor houses a conference room and head of school Rachel Simpson's office.

“Last year, we identified and made a list of every space in every building of the school,” President Ann Marie Krejcarek said. “Starting with this year, we gave ourselves five years to renovate or refresh every space on campus.”

Schools of the Sacred Heart challenged designers to match the architecture of the schools to a mission-driven, 21st-century learning environment, while still maintaining the architectural integrity of the historic buildings, according to Director of Educational Innovation Howard Levin.

“We really worked with the designers to make our ideas come to fruition, while using their knowledge and expertise to build on our plans,” Levin said.

“I always said to the board that there are some places you don’t take families on the tour,” Krejcarek said. “Some of the spaces we redesigned were definitely not on the tour and now most proudly are.”

Summer renovations aimed to create a new identity for the girls high school and define within a shared space what is specifically the high school, according to Plant Operations Director Geoff De Santis.

“You originally had to walk all the way up to the third floor of the Flood Building to know that you are in the girls high school,” De Santis said. “Now, you walk into the Main Hall and up one flight of stairs and you know unmistakably where you are.”

The classrooms were also reorganized to floors by department.

Renovations in the Grant House were made to bring the building up to current safety standards, and to better utilize space in the Hammond House and Stuart Hall High School.

Building codes for staircases have changed since the Grant House was built in 1905, resulting in the railings being too low and the spaces between the balusters too wide for modern safety regulations, so clear paneling was added to fill the gaps and raise the height of the staircase without actually altering the original staircase itself.

The wall-to-wall carpeting in the Grant House was removed, exposing the original hardwood and marble flooring.

“It’s not the furniture that makes the house, it’s the elements that make the house,” Krejcarek said. “It is so grand, and utilizing its original features to enhance our spaces.”

Second grade classrooms in Hammond House were converted to math labs for the middle form students, while the second grade is now housed in the Adam and Duchesne rooms on the first floor of the Flood Mansion.

Six classrooms at Stuart Hall High School had their walls painted with whiteboard paint ceiling to floor, and modern educational furniture added with the theme of better teacher-student collaboration together in mind, according to Krejcarek.

Collaboration and flexibility were the main themes of the renovation throughout all four schools, and the new furniture that was bought was very carefully selected for that purpose, according to Levin.

“Our new spaces are not what you would normally think of as a traditional classroom,” Levin said. “By working with architects who have done a lot of research about how learning spaces are changing — and then taking that research and making it work for us — we are really establishing ourselves as leaders in educational innovation.”

Students and faculty are still adjusting to the new spaces, but the response so far has been largely positive.

“The renovations make a lot of sense, especially the reorganization of the classrooms,” sophomore Victoria Bernhart said. “It makes everything seem much more organized and cohesive, having all the teachers of a subject together is really nice when you need help with work.”

The redesigned second floor of the Flood Mansion, now called the Gallery, is used as a meeting space for administration, faculty and students, a place for students to congregate or do homework or a space for teachers to do special activities in their classes.

“It’s kind of like an extension of the Center,” Bernhart said, referring to the large open space on the third floor of the Flood mansion which was renovated two years ago. “It’s nice to have another place to meet up with friends, or to have club meetings or for talking with teachers outside of class.”

The occasional French class has been held in the Gallery, which is a nice change of scenery, according to Stuart Hall sophomore Kaito Henry.

“A few weeks ago we were practicing how to say our favorite activities and how often we did them,” Henry said. “We would walk to and stand underneath one of the signs with a frequency adjective on it, and trying to do that in a small classroom would have been really hard.”

Students are enjoying the freedom that the new spaces and furniture allow them and the overall flexibility of the new classroom spaces.

“I really like all of the new furniture and how moveable and interchangeable it is,” Henry said. “It’s nice to be able to move around during class, instead of being stuck in one place for 80 minutes at a time.”

The furniture, bought largely from German company Vereinigte Spezialmöbelfabriken (VS) and American company Steelcase, is designed to enhance collaboration and the best ergonomics possible, according to Levin.

“I like the new furniture, but I am slightly divided on it,” Bernhart said. “Yes, it allows for lots of flexibility, but I really don’t think the poufy chairs match the crown moldings.”

The new spaces were designed the intent of allowing students and teachers to decide how they want to use the space, rather than an area designed for one specific function or use only.

“The most exciting thing about this whole renovation is watching how the students and teachers are using the spaces,” De Santis said. “We are really on our way to establishing ourselves as leaders in educational innovation.”