Exchange student from Sagrado Corazon travelled approximately 5,944 miles and is experiencing a new way of life. 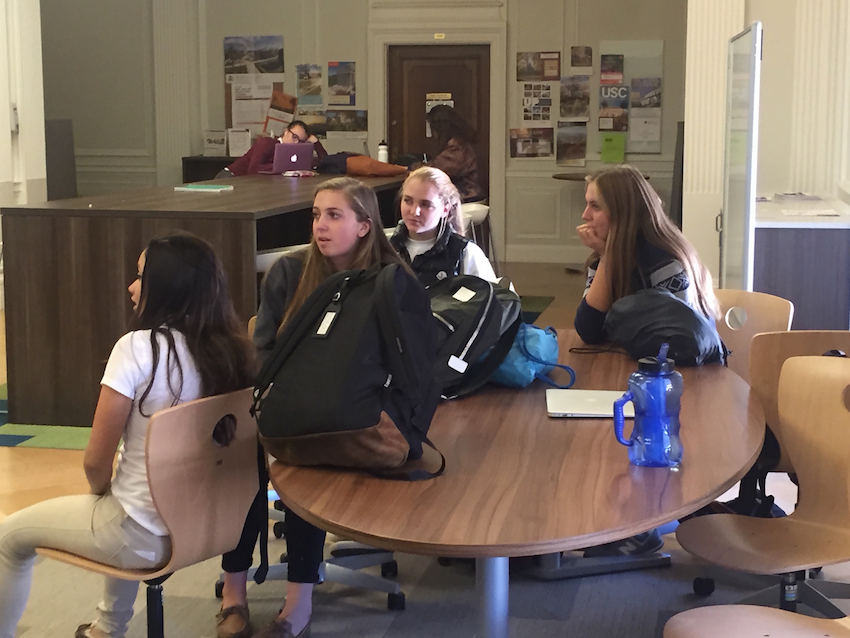 Sophomore Clara Vilar participates in a Responses to Oppression class on her first day attending classes as part of an exchange program from Barcelona, Spain. Vilar will stay in San Francisco for three weeks before returning to Spain.

A sophomore will be visiting classes for three weeks as part of an exchange program from Sagrado Corazón, the Sacred Heart school in Barcelona, Spain.

“Some things are different from Spain, but I like it, and everybody was very kind,” Clara Vilar said of her first day attending classes. “I like the experience of being in another school with different ways of doing things.”

Vilar attended classes alongside sophomore Olivia Matthes, who is hosting Vilar during her stay in San Francisco, before practicing with the varsity volleyball team.

“We had students ask her questions about herself and about Spain, and she talked about some of the differences between our culture and spanish culture,” spanish teacher Riki Garcia Rebel said. “She was laughing because the family she’s staying with ate dinner at seven, and she was perplexed at why they were eating so early.”

“She’s actually trilingual — she speaks Spanish, Catalan and English,” Garcia Rebel said. “A lot of interesting things came up in the lesson — it was great having her in our class.”

After Villar returns to Barcelona, Matthes plans to stay with her on exchange in the beginning of November.

“I knew that Convent has a network of schools around the world and I’m very interested in travel and language,” Matthes said. “So, when I found out that you can do an exchange I knew that was something I wanted to do.”

Students who wish to participate in a similar exchange experience can fill out an application to visit international or domestic Sacred Heart schools, according to Devin DeMartini-Cooke, Director of Student Life.

“It was the first day of school but I think [Clara] enjoyed it, and she’s getting really good at English,” Matthes said. “I’ve learned a little bit about her and her family and where she lives, and I just hope she gets a good sense of American culture and a new experience.”