Senior coursework gets a makeover 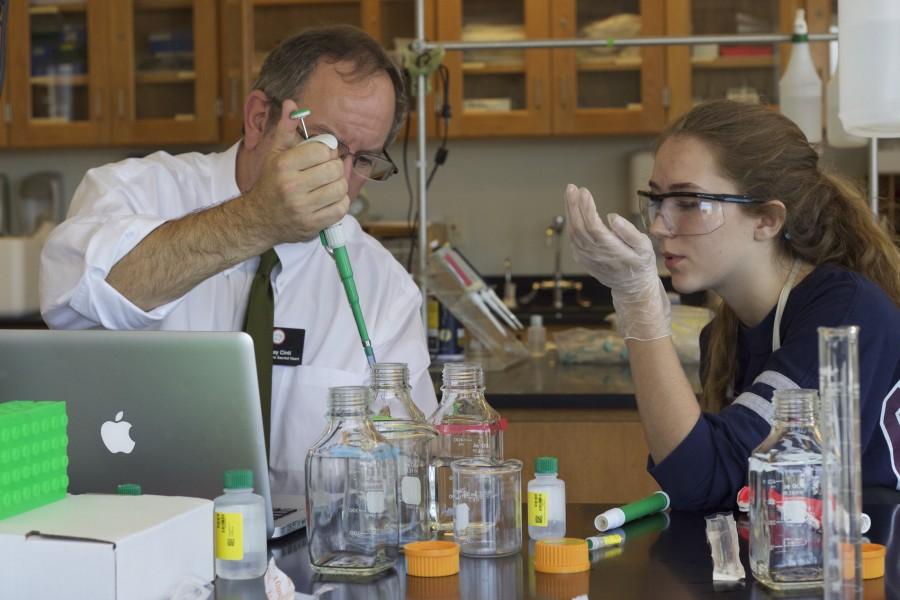 Senior Madison Stetter examines Conservation Biology teacher Ray Cinti's experimental demonstration. The experiments themselves are conducted by the student independently with the assistance of Cinti.

“We are looking to keep seniors interested throughout the entire year,” English department chair Rachael Denny said. “One way we are hoping to encourage that is by changing up the focus of each semester.”

English teacher Mark Botti possesses his own syllabus of feminist literature taught in the first semester and banned books in the second.

“It’s very interesting because we’ve already read what men have said 200 years ago,” senior Jennifer Quillen said about Botti’s course. “I like learning how other people reacted to feminist literature at the time and seeing how it has evolved as well.”

Theology teacher Rachel Bundang is structuring her course by teaching a different topic each quarter under the umbrella of women, religion and social justice.

The first quarter will cover introductory texts that aim to establish a strong foundation for social justice and feminist analysis. The second quarter will address issues of social justice with topics including racism, rape culture and reproductive issues.

“Freshman year was more focused around religious traditions and catholicism,” senior Catherine Heinen said. “We’re now learning about that in terms of our current culture.”

Social justice issues such as wealth, labor and poverty will be covered in the third quarter and environmental justice with a focus on the local water crisis in the fourth quarter.

“There’s an attentiveness that I think benefits students coming out of the class,” Bundang said. “By mixing religion, women’s studies and other social justice concerns, you’re also drawing from things in history or sociology and certainly current events.”

Science department chair Ray Cinti also made modifications to the Conservation Biology course by making the course an independent study.

“My role as an instructor in the class is one of a principle investigator,” Cinti said. “I’m just going to guide and look into the research and see what is out there, what has been done.”

Conservation Biology originally focused on experimenting and gathering data from redwood trees during projects such as DNA sequencing. Students can now continue these studies or veer off the redwood tree angle for their own independent projects.

“It’s really a great opportunity to get hands-on in the science you’ve been studying and applying it to an everyday or worldwide issue,” senior Samantha Lee, a student of the course, said.

Students conduct their own experiments by copying a previously conducted experiment, tweaking it, optimizing it or creating something new to collect data. A final phase allows students to conduct their own investigation after learning that there is a question within their analysis that, to them, is unanswered.

“This class is giving students the opportunity to discover,” Cinti said. “I’ve waited my entire teaching career to see this unfold.”