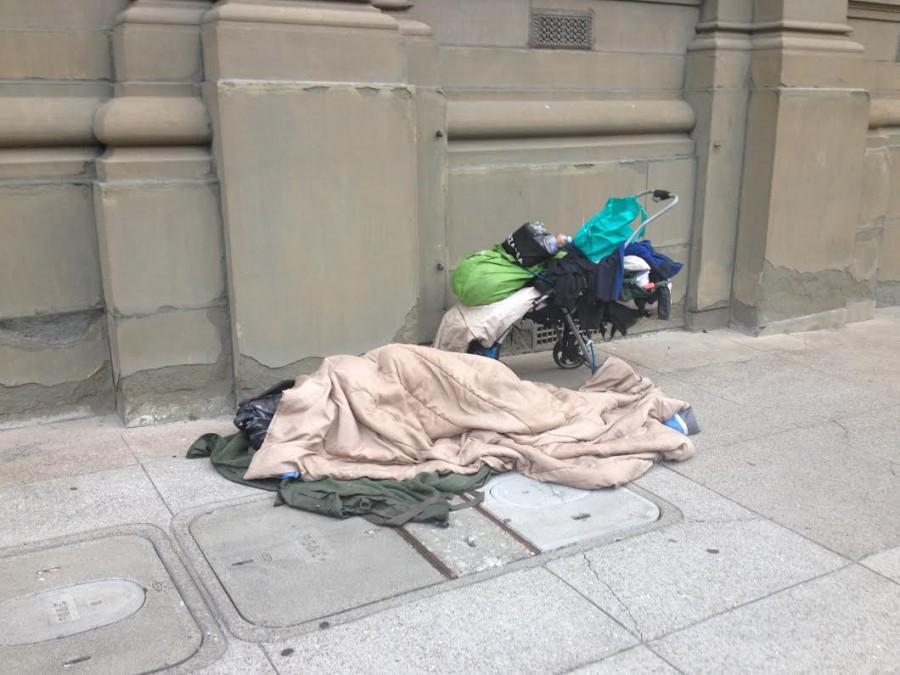 One of San Francisco’s 6,686 known homeless resident sleeps on Webster at California Street, part of the designated walking route between CSH and Stuart Hall HS, on Monday morning. Students are getting involved with helping homeless individuals through volunteer work and on-campus programs.

While most San Franciscans cross the street when one of the 6,686 homeless ask for money or food, some students are taking action to help the problem.

“I think St. Anthony’s is perfect for people to get involved because it is good for one-on-one time, and you talk to them as you eat lunch with them,” senior Caitlin Cook-Davis, who has volunteered at St. Anthony’s a few times, said. “It is a good way to have personal time with them and make a connection.”

“I served food to homeless families and people in poverty and disabled people,” Cook-Davis said. “I also worked in the prep room, so I cut the watermelon and other fruit, so they could make juices and stuff for them.”

April Matsumoto, a participant in Stuart Hall High School’s One Less Hungry project, passes out sandwiches to the hungry around San Francisco.  “We pass out sandwiches about once a month,” Matsumoto said. “We get to talk to them, have some conversations.”

Homeless people are prevalent in all neighborhoods throughout San Francisco, and helping those in need is an important part of being in a more privileged community, according to Matsumoto.

“Being such a nice school, the homeless give a different look,” Matsumoto said. “When we have so much and we don’t give — it looks like we don’t care. They need things that we have, so we should do our best to help.”

Volunteer groups help provide shelter to about 3,100 of the homeless in the City, according to Bruce Beery, the Director of Development at Episcopal Community Services in San Francisco.

“Our shelters provide an opportunity for people who otherwise would be unsheltered to be in a safe, clean environment,” Beery said.

“A person who’s homeless will go in and have an intake assessment with city workers and workers from different corporate sponsors,” Joyce Crum, Director of Housing and Homelessness Division Human Services Agency, said. “The corporates bring the services with them. There might be someone doing dental work.  We have DMV there, eyeglasses, someone to fix wheelchairs and so on.”

“The big thing that we are looking at towards the future is a coordinated entry system for our homeless families, so they can walk in one door seeking services, and they can be referred to those services instead of going all over town seeking services,” Crum said.

With the Super Bowl coming to San Francisco, presenting a clean and safe environment is important. However, plans to shelter homeless people are not only for show but also to reduce the general homeless population, according to Bevan Duffy, Director of Housing Opportunity, Partnerships and Engagement,

“We want everybody to have a good experience,” Duffy said. “A kickoff event for the NFL season was held here, and I got a call from the (Coalition on Homelessness) asking if people had been moved out of the area. There was so much construction and activity that people were already moving away from it.”

Sleeping on San Francisco’s ground without shelter is a nightly ritual for over 3,500 of the homeless residents everyday, and the City is adding homeless shelters instead of saying what streets people can and cannot not sleep on.

Homelessness prevention programs rely on volunteers to implement their services  welcome the help of high school students, according to Beery.

“I would encourage every high school student to volunteer at one of the services in San Francisco,” Beery said. “Whether it is serving food or providing some form of assistance to the homeless community whether it is providing shelter or providing food.”

The experience of volunteering brings a more relatable sense of the problem, according to Cook-Davis.

“I remember I was eating lunch with a woman, and we had a really good conversation about school and what she liked to learn in school,” Cook-Davis said. “It was really cool because you don’t get to know homeless people, so it’s good to remember that they are good people too.”