Viewings of documentaries 'Miss Representation' and 'The Mask You Live In' aimed to bring awareness to the images the media portrays as ideal for both males and females. 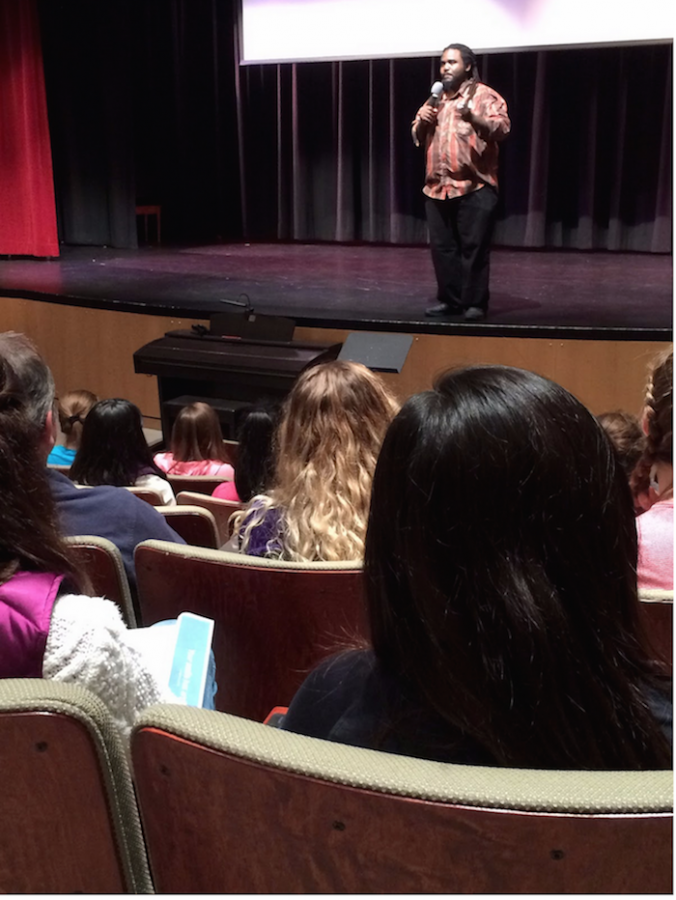 Students listen as Ashanti Branch introduces the film “The Mask You Live In." Branch was featured in the film for his work empowering young men and boys in schools around the Bay Area.

Students gathered for an all-day assembly, learning about the lines between genders in society, and how the influence of the media encourages the definition of those lines.

“I don’t like that the media portrays women as dumb and stupid, almost less than human,” sophomore Ariana Davidis said. “A woman’s main attribute is her wisdom and intelligence, and the media never shows that.”

The morning was spent viewing the documentary “Miss Representation,” a film about the idea that women’s value lies only in their appearance and sexuality, and not in their ability to be leaders, according to Head of School Rachel Simpson.

“As a teacher at a school like this, which strives to empower young women, it is really hard to watch films like these,” teacher Ray Cinti said. “Frankly, it’s terrifying to see how prevalent the unhealthy images and objectification of women are.”

The film showed the views of prominent figures in society as well as high school students — interspersing facts and figures to emphasize the struggles for gender equality. Clips from advertisements, television shows and movies were added as real-life examples of the objectification of women.

“The facts and figures about women and the media were astonishing,” Davidis said. “The film gave clear examples that what they are doing is wrong, and that we need to do something about it.”

“The Mask You Live In,” another documentary following men and boys as they try to conform to the societal definitions of masculinity, was viewed later in the day as a comparative view to the morning’s film.

Activities were planned to make students uncomfortable and ask questions, according to  Simpson. Both films attempted to show the lines humans draw between the sexes, and what behaviors are acceptable for each sex to demonstrate.

Stuart Hall High School students had a similar schedule, but began the day viewing “The Mask You Live In” and ending with “Miss Representation.”

“The films were a call to action, we need to fight for our rights, we need to fix gender inequality,” Davidis said. “It starts with us, as we need to change the media and no one else can do that for us.”