Students posed as Native Americans and Europeans as they defended and prosecuted their own side of the case. 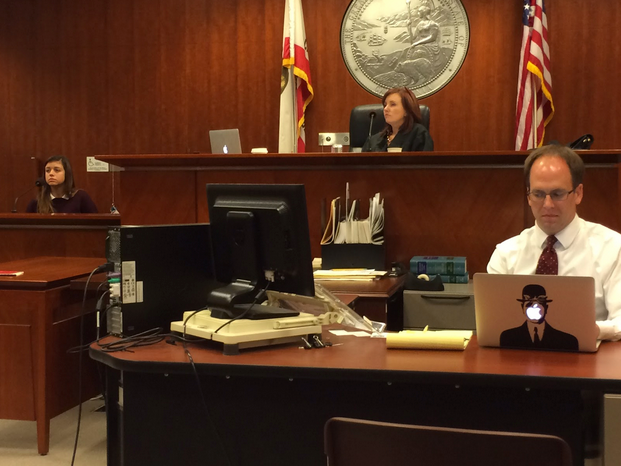 Pilar Ballestreros-Cordero takes the witness stand as Pocahontas, supporting the side of the Europeans, while "Judge" Rachael Denny and "Bailiff" Michael Stafford look on. The European side lost the trial today, but were able to cut damages almost in half, and were only required to pay $9 trillion of the $18 trillion requested of them.

The sophomore Responses to Oppression ‘Hislish’ class traveled to the Civil Division of the Superior Court of California yesterday and today to hold mock trials, in which the Native Americans sued the Europeans from 1700.

“The trial was really an idea of Mr. Stafford’s a few years ago when he was just teaching world history,” Hislish teacher Rachael Denny said. “It’s something that started about three years ago but has really become what it is today through the collaboration between Mr. Stafford and myself.”

The trial is the final project of the first unit, the conquest of the Americas, with emphasis placed on the Columbian Exchange and its lasting effects on the world today.

“Using a big group project like the trial as a teaching strategy really forces students to get personally invested in the content, therefore making it stick in their heads much better,” Denny said. “I am sure that the Columbian Exchange will forever stick in the heads of all students who take Hislish.”

Efforts were taken to ensure that the trial would resemble an actual civil trial as closely as possible, with Denny playing judge and all trial participants being required to conduct themselves in proper courtroom manner.

“We had to dress professionally, like a lawyer, or in dress uniform,” sophomore Victoria Bernhart said. “We also had to follow the rules of courtroom etiquette, such as addressing the judge as ‘Your Honor’ every time.”

The trial culminates over two weeks of research, planning and preparing by the sophomores, who are all required to have active roles in the trial, according to sophomore Sydney O’Neil.  Each group, regardless of side, needed lawyers and witnesses to support their sides of the case.

“I was a witness acting as Nicolas De Ovando, the governor of Hispaniola,” O’Neil said. “I had to do a lot of research about his time in the Americas and how he treated the natives in order to prepare for my part.”

The Native American groups charged the Europeans with what they felt were the most unforgivable offenses committed against them, while the Europeans then had to defend themselves.

“I learned a lot about how history really depends on the people who tell it and that the accounts you choose to believe really influence your opinions,” Bernhart said. “I learned a lot more about the conquest of the Americas, and the trial was a really cool way to learn about it.”