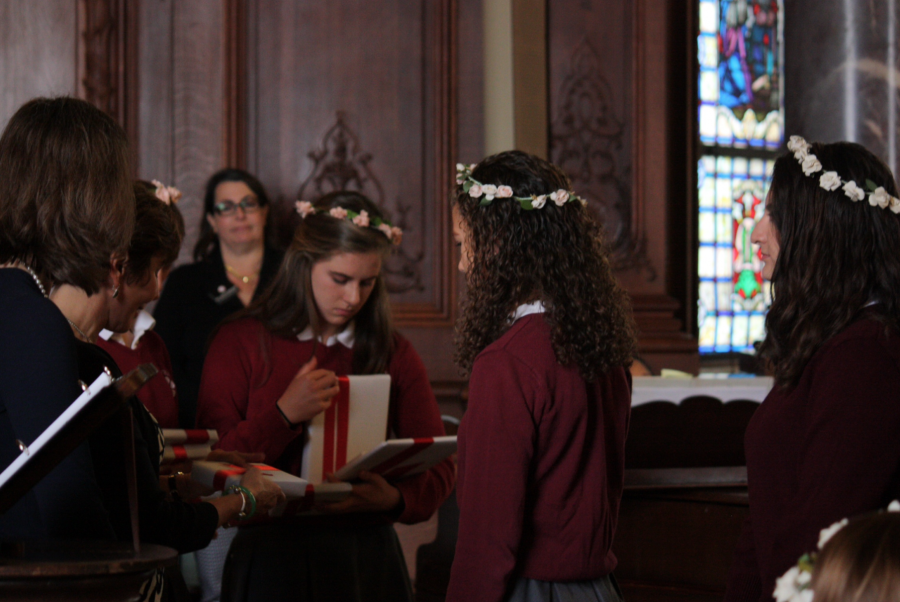 The 128th annual Prize Day ceremony took place in the chapel today to celebrate achievements throughout the academic year.

“Prize day was beautiful,” sophomore Bella Kearney, who received an award in history, said. “The chapel created a more tight-knit community with all of us being in one area.”

The ceremony acknowledged both academic and service oriented successes and aimed at leading students to their next grade level before the year’s end, according to head of school Rachel Simpson.

“Prize Day is a time when we really acknowledge the fact that we reached the end,” Simpson said. “Maybe there were ups and downs along the way, but we got to the finish line.”

Changes made to this year’s ceremony included a move from the Main Hall to the chapel and the replacement of awards, such as the highest performers in each grade and multiple distinctions for specific classes given to more individuals, with departmental prizes.

Recipients of the departmental prizes displayed academic excellence in each subject for their grade and received a book chosen by their teacher as a recognition of their achievements.

“It gave me more passion for the subject that I got it for,” Kearney said. “But there were mixed feelings on it because less prizes were given.”

The various alterations made this year were put in place to simplify and improve on the traditions of the event, according to Simpson.

“Enhancing tradition is always the intention,” Simpson said. “It’s always a work in progress, and we are always open to changes and tweeks moving forward.”

Each prize that students receive is embellished with artful calligraphy written by librarian Cynthia Velante.

“Calligraphy is an art,” Velante said. “It makes the students feel special.”

This Prize Day marked the final one for Velante, as this academic year is her last at Convent.

“If they contact me next year, and they want me to do it, I will do it,” Velante said. “I want to be a part of the prizes so that someday when they look back, they can remember me for that.”

The ceremony began at 9:30 a.m. with students receiving traditional floral wreaths, followed by service awards and departmental prizes. After, seniors earned special senior service prizes recognizing their notable work over the past four years before all students received awards for grade completion and class presidents gave speeches to reflect on the school year.

“We want to develop rituals and ceremonies that reflect what is of value to us today,” Simpson said. “What we really want to emphasize in Prize Day is the acknowledgment of the characteristics that go beyond academic excellence. Not grade point average but really what the characteristics are of an excellent student.”