Boots are back as uniform approved footwear 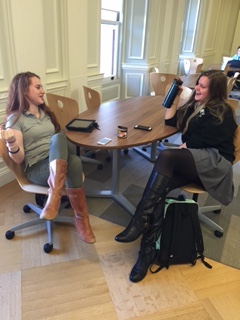 Students are now permitted to wear boots as part of the uniform after an announcement made by Head of School Rachel Simpson at Friday’s assembly.

“We had discussed allowing taller boots to be allowed during the rainy season,” Administrative Assistant Jeanne Asdourian said. “People were wearing boots that were just not a good look with the new uniform.”

Prior to the announcement made last Friday, students could only wear boots when it was raining. Simpson noted at the assembly that students were “voting with their feet” by wearing boots even when they were not permitted.

“I’m not sure if I will be wearing boots more often but I think that it will make the school more appealing to students who are applying,” freshman Kelly Rosanelli said.

Students, such as freshman Katie Thomis, are in favor of the new policy and have been taking advantage of it since the announcement was made.

“I’m really excited to wear boots because it makes me feel like the school trusts us to act and dress responsibly,” Thomis said.