History of Rock and Roll offered as an elective 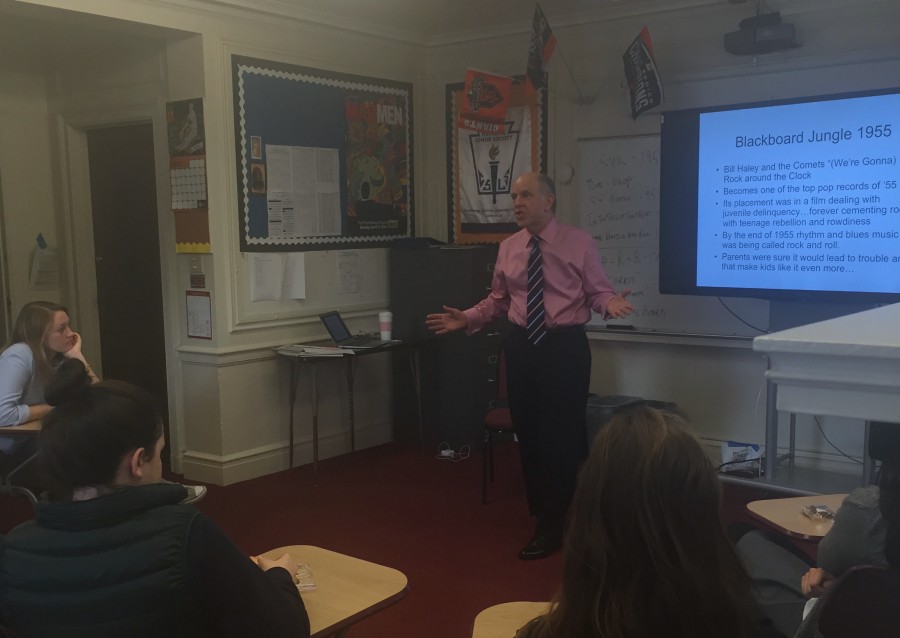 Starting second semester the History of Rock elective returned to the curriculum giving  students the opportunity to listen to the evolution of music within the school day.

“We start studying the history of rock in about 1955 and continue as far as we can go within the school year, history teacher Dr. Michael Steinbrecher said. “We listen to how the music has evolved over the years from Buddy Holly to more modern music.”

The class curriculum mostly covers rock music, but also folk music since it stems from the genre along with R&B and blues, according to Steinbrecher.

“We have only recently started our study of the history of rock, since the new elective started second semester,” Senior Anna Lyons said. “So far we have been looking at the contributions of R&B and jazz to the early days of rock.”

The elective class is designed to introduce students to genres of music they might not have heard before, and to outline how music has evolved throughout history, according to Steinbrecher.

“The class is an elective in every sense of the word, we get to sit, learn about, listen to and enjoy music with no pressing deadlines for projects or homework and test,” senior Siobhan Lewkowitz said. “It’s a time to talk and have fun while learning about rock music, but within the academic day.”

In the first four classes students have learned the history of rock through the mid-50s, how the rock genre affected America’s youth, and that rock originated from R&B and folk genres, according to Lewkowitz.

“Honestly what drew me to the class was Dr. Steinbrecher’s enthusiasm for the course,” Lyons said. “ I already knew I was interested in music, I have been for most of my life, but studying the actual development of a genre of music is really exciting, but also educational.”