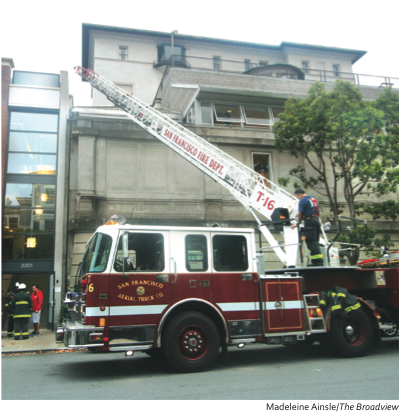 A burnt out motor caused an evacuation of the Broad- way campus Tuesday evening, interrupting and cutting short several after school programs.

Fire trucks responded to a pulled fire alarm around 5:40 p.m. when multiple witnesses smelled and saw smoke on the lower floors of the Siboni Arts & Science Center.

“When we got here there was a lot of smoke that had filled the theater,” Lieutenant Ken Smith of the San Francisco Fire Department said. “There was no actual fire, since electrical fires are different. Once they get hot and start to burn, there is a different kind of smell that’s not actually a fire.”

The smoke in Siboni was caused by a motor in an air handler that continued to run after the ball bearing stopped turning, according to Plant Operations Director Geoff De Santis.

“The circuit blew upstairs in the mechanics room,” Smith

said. “It was from the big fan that creates the air condition- ing — that’s where it blew and it came through the air ducts that push the air out, which caused the smoke to fill up inside the theater.”

Administrators were able to identify the location of the pulled fire alarm due to the fire panel in the Main Hall, accord- ing to administrative assistant Donna Morgan

When one fire alarm is pulled within the school, all of the fire alarms go off to ensure that ev- eryone evacuates and is safe, according to Jaime Dominguez, Head of Stuart Hall for Boys.

“The fire department came in to identify the cause and to make sure it’s safe to go back into the buildings,” Dominguez said. “We [had] people observe overnight to make sure nothing else happened.”

The fire caused minimal damage and none to the struc- ture or classrooms. Despite fire alarms ringing occasionally on Wednesday as they were reset, classes continued as normal.