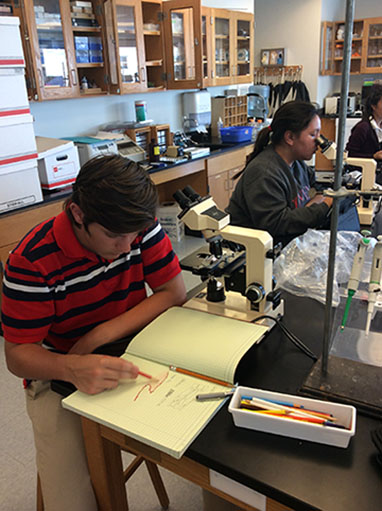 The yellow school bus filled with grey skirts and khakis that has been driving the 10-block stretch between Convent and Stuart Hall every afternoon, shuttling students to coed language classes, now runs between every class period due to the expansion of coed class offerings throughout the day.

“I think we as a school have taken an approach of being careful in choosing which classes are and which classes aren’t coed,” Matt Woodard, physics and psychology teacher at Stuart Hall High School said. “I personally like teaching a single-sex physics class, but I do think it is beneficial to have my psychology class be coed.”

“The time used for students to get from one campus to the other is also a great time for me to meet with teachers when I do not have to go to the Convent campus,” senior Declan Ebeling said. “It gives me an extra break in the schedule to study, meet with teachers, and do work that I otherwise would not have had time to complete.

Incorporating the passing time into the schedule has not affected the length of classes with the shortening of assemblies from one hour to 40 minutes and eliminating long lunches on Wednesdays.

“Although I am a little upset about the shortening of lunch, I feel that it was a good trade off because with the 20 minutes, I can get to Stuart Hall on time, and even grab something to eat,” senior Taylor Schendorf said. “In the end, it takes away some my social time during lunch, but it’s a good tradeoff academically.”

Some students traveling between campuses also need to leave their electives 10 minutes early to get to class on time.

“Teachers have been very accommodating to us leaving early,” Schendorf said. “They teach the important parts of the lesson first so that we do not miss too much, plus the way that elective was scheduled fits perfectly for students who have to get to another campus quickly.”

The addition of coed offerings over the last five years has allowed students to select more courses, mostly at the junior/senior elective level, according to Head of School Rachel Simpson.

“There is definitely a wider selection of classes for me to choose from due to all the coed offerings,” Ebeling said. “Last year I took physiology at the Convent campus, but I had the problem of showing up to class late almost every time because of the transportation issue which has been fixed this year.”

The two high schools review the course registrations in the spring, using the data to assign courses to teachers.

“In the case of language courses, coed offerings in Mandarin, French and Latin created robust programs in these areas,” Simpson said. “The Spanish department felt strongly about adding an honors level at Level 2, and this also invited more coed language in Spanish in order for students to be in the best language placement for them.”