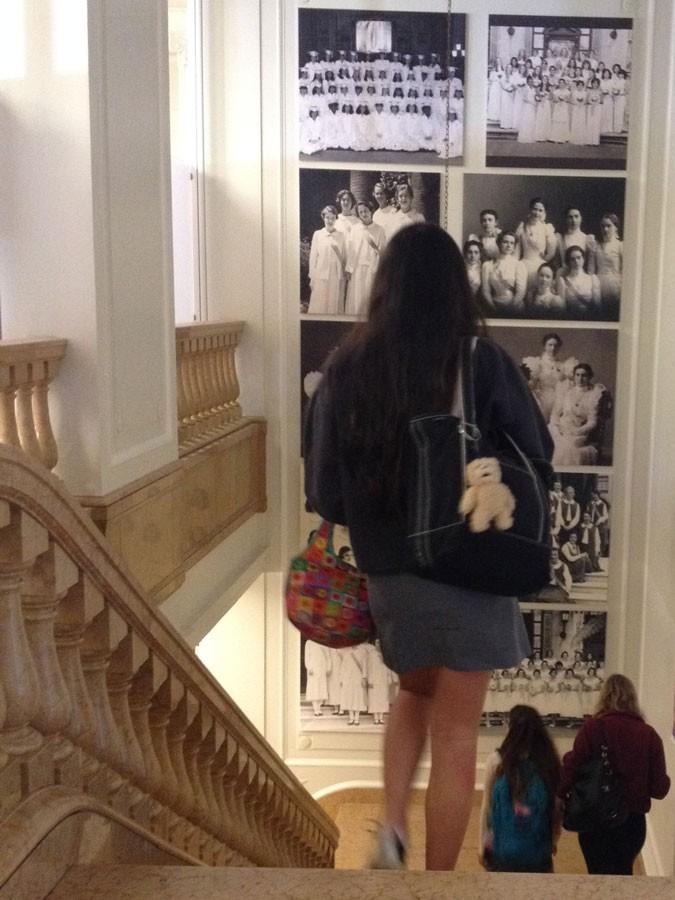 Alice Jones/The Broadview RISING UP: Students walk down the stairs from the Center to the second floor sporting the uniform skirt that has sparked debate due to the rising hem lines.

During attendance each morning, teachers also submit an online uniform check and are often caught in disagreements with students about sweaters, shirts, pants, shoes and what is considered “uniform.”

Jeanne Asdourian, Lead Student Conduct Advisor, sees over a dozen uniform infractions a day, which have lead to a conversation about the school possibly moving from a uniform to a dress code.

“Currently, the skirt is being worn too short,” Head of School Rachel Simpson said. “Its current look doesn’t connote a seriousness of purpose with the work done at school as a well-established uniform would.”

Although some students knowing disregarded the uniform rules, others feel compelled to follow them.

“The skirt represents our school and what makes our uniform unique to us,” junior Christina Berardi said. “I think a more clear understanding of what is uniform is more effective than the guidelines of a dress code would be.”

Students formerly could wear any school T-shirt, but as of this past August students may only wear collared shirts of four colors, while seniors may wear any color. In 2011, administrators brought three new skirt options along with the current one to the student body for a vote for the following year uniform. The decades’-old single inverted pleat won by a landslide.

“The skirt is wore by a lot of the students,” junior Paloma Palmer said. “If we constantly hear from administrators to pull our skirts down, we might as well get rid of the skirt and look better in a dress code.”

The most common uniform infraction is the lack of a collared shirt, according to Asdourian, and then pants that vary from the prescribed dark neutral tones — or are leggings.

“Uniform skirts bring to mind a negative connotation of a risque plaid school-girl skirt,” Palmer said. “I like the tradition aspect of the skirt, but Convent needs to get up-to-date with what is going to be a realistically appropriate uniform.”

Consequences for repeat offenders can range from a day of dress uniform to a week if the student is consistently out of uniform. An email is sent to the PAWS adviser, head of school and parents of the student.

“The aspiration behind offering the variety of polo colors was to get us out of the casual T-shirt look that was plaguing the uniform, but this has perhaps impacted the understanding of the colors and muddled the policies of the uniform,” Simpson said.

CSH’s uniform has taken several forms since the original formal white blouse and black skirt of the 19th century students. Currently, khakis and corduroy pants are a part of the casual uniform and were officially added into the handbook in the late 2000s.

“When I was a student at CSH, we picked the current skirt style and the burgundy sweater, and wore it with pride,” Asdorian (’79) said. “It was so cool to be the only school that would let the students pick a uniform that we could all feel comfortable and confident in. The current lack of compliance shows a genuine lack of pride of being in this community.”

Asdorian says she tries to give students the benefit of the doubt allowing them to follow the rules has sent home a total of 15 emails home to repeat offenders this year.

“It’s almost as if the uniform is the thing to rebel against yet it’s there to make us feel united by a sense of community, so in the end it’s the community that’s being rebelled against and suffers,” Jeanne Asdourian.

Fourteen-year-old Stuart Hall High School is the only one of the Sacred Heart Network of San Francisco schools with a dress code from its founding and students are known to adhere to their dress code better than the girls do with their uniform, according to Asdourian.

“We live in a progressive and relaxed city and are the only independent school with a uniform,” Simpson said. “While students can benefit from having a little more freedom in the uniform, I appreciate the tradition of having a uniform and its benefits also. We have to evaluate how we’re living out the uniform and whether we actually have a uniform or a dress code.”