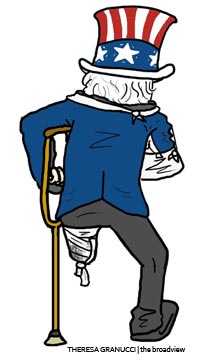 America has reached a low point.

During President Obama’s recent address to Congress in which he attempted to dispel myths surrounding his health care plan, a representative
stood and angrily shouted, “You lie!” at the President of the United States of America.

This foolish act from American leadership displays how outrageous the national health care debate has become. The country has forgotten this issue is not about ludicrous political disputes, but rather the health and well being of 46 million Americans.

The fact that one of the most powerful countries in the world cannot
protect its citizens is ridiculous. But even more outrageous are the arguments in opposition of healthcare legislation. While some people have legitimate concerns, so many arguments are rooted plain ol’ selfishness.

Health care reform currently under fire meets the needs of a country that is struggling to protect everyone. The legislation will provide affordable health care to anyone who wants it, promote healthy competition among independent health insurance companies, and improve the overall quality of healthcare — still leaving Americans free to make any choice they would like.

The problem is not in the content of H.R. 3200, but rather in the egotism that is deeply rooted in the hearts of Americans. Those who have health care don’t care about people who don’t, they just care about not paying taxes. Ironically, this bill would universally decrease health care costs — but that’s not important.

Health care should not be a controversial, partisan issue. Gay marriage, abortion, medical marijuana — these are controversial issues. Health care is the most basic foundation for society. Americans need to rally together to protect those who can’t help themselves.

Americans have long been known to lend a helping hand to those in need. Instead, most Americans insist on demanding a plan that perfectly caters to their own needs — something obviously impossible for a country of 300 million.

A nationalized health care plan is the best bet that America has for protecting everyone while still maintaining freedom and choice.

This country provides aid to humanitarian crises and to natural disasters in foreign countries around the world. It should not be so impossible to provide support to those in our own backyard.

American health care should not just be for those who can afford it, but it should be an illustration of just how much each human life is valued.