Overthrow the reign of drought 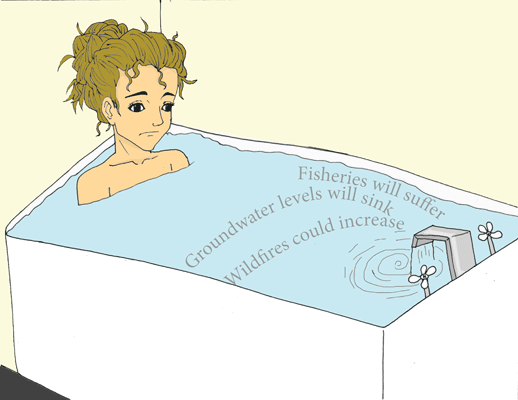 Many Bay Area residents awoke to the pounding of rain against their windows last Thursday morning. Four days of sporadic showers had many crying “miracle” after one of the driest seasons on record, but the California drought is far from over.

While the past week has been exceptionally wet, with San Francisco receiving over three inches and Sonoma County getting four inches, the Bay Area would normally have received about 14.5 inches by this point.

Although reservoirs levels are creeping up, they are still far lower than necessary for California to escape drought.Even if the rain does continue over the next few weeks, conserving water is the only way to avoid a future of water rationing and snowless mountains.

Using less water sounds great in theory, but when faced with taking sporadic, 3-minute showers, cutting down on water doesn’t sound quite as appealing.

Stories of past generations recycling shower water and not flushing toilets, (“If it’s yellow let it mellow, if it’s brown, flush it down”) are just as applicable today as they were over 30 years ago.

California building codes require all houses built after 1994 will be required to install low-flow plumbing fixtures by 2017, although the state will most likely be out of the drought by that time, conservation is imperative to sustaining a healthy environment.

The United States Department of Agriculture recommends citizens who are not interested in replacing their existing showerheads and toilets turn off the faucet whenever possible.

Many Americans don’t realize how much water they use in a particular day between washing hands, flushing toilets, taking showers, doing laundry, running the dishwasher, drinking, watering lawns and brushing teeth.

Mandated water rationing hasn’t yet been imposed, but if Californians continue to use the same amount of water and rainfall levels remain low, citizens may soon see the government fining those who use above the directed water level per home.

Breaking out of old habits is often difficult and although turning off the faucet while brushing teeth may seem like a small change, it can have a positive “ripple effect” on the environment.

Taking shorter showers and using minimal amounts of water are temporary solutions to an longterm problem. Californian droughts tend to come every 30 years, and although the need to conserve is particularly strong at the moment, using less water, even in times without drought is hugely beneficial to the environment.

The California drought stretches beyond just the state. As one of the world’s top agriculture producers the effects of California’s drought will be felt worldwide. If everyone cuts down their showers by 20 percent, flushes only when absolutely necessary and turns off the tap when not in use, the negative effects of the drought can be curtailed.