Teens feel pressure to be ‘perfect’ 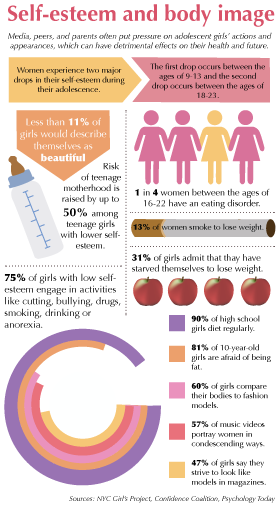 Being bombarded with messages from their friends, parents, boys and especially social media can take a toll on the way a girl perceives herself in the mirror at the end of the day. These “role models” can give off the message that the reflection a girl sees isn’t good enough, leading to detrimental effects on her self-esteem.

Seven in 10 girls suffer from self-esteem issues, a thinking disorder in which individuals feel that they are not “good enough,” whether in school, physical appearance or relationships with friends and family members. Girls who have low self-esteem can sometimes be affected by depression, bulimia, anorexia or self harm.

“There needs to be a better representation,” junior Gaby Messino said. “Everyone is just trying to fit in, and the way that the media defines ‘fitting in’ is that you have to be pretty, you have to have the right clothes and the right face. It’s not okay.”

Low self-esteem issues frequently take root at home where mothers can not only pass on their own insecurities, but take out their self-loathing on their daughters, according to family therapist Susan Badger.

“When children feel loved, supported and protected by parents, they are prone to feel ‘good’ and secure about who they are,” Badger said. “If parents are abusive, negligent, unavailable or critical, this can be hurtful and damaging.”

The Dove Beauty campaign recently produced a short YouTube video on mothers and daughters, teaching them how to redefine beauty through taking a selfie. Mothers spoke about their insecurities, and their daughters responded with experiencing the same self-doubts.

The relationship of a mother with high self-esteem directly relates to a daughter experiencing higher self views, according to a study of 113 mothers and daughters published in Journal of Youth and Adolescence.

While self-image problems may begin at the home, the school environment can be the place where problems from home heighten due to other girls who are also insecure with themselves.

“If kids lack that sense of self-worth to start with, bad experiences and mean people can make them feel much worse,” Badger said. “They are more vulnerable to bullying, teasing or being excluded.”

Over 70 percent of girls ages 15-17 avoid daily activities like going to school when they feel bad about their appearance, according to dosomething.org.

Girls can also experience feelings of self-doubt at school because of isolation and exclusion by other girls.

“When girls are excluded from a clique, the feeling of isolation may be more different for girls than boys because they tend to prefer to be in groups or work in groups,” Women’s Studies teacher Sarah Garlinghouse said.

The ideals of beauty can also be set by the expanding mass media culture and advertising. Advertisements constantly determine what is beautiful through highly retouched, enhanced and unrealistic models, who in contrast to the average American woman, is inaccurate, according to the Social Issues Research Centre.

The people behind the scenes who create, edit and distribute the work make it seem that their figures and appearance is realistic and attainable, while only 5 percent of the female population can attain what a model appears to look like, according to the Social Issues Research Centre.

Mass media can give the implication that girls always need a happy and upbeat attitude and that girls are always in control. Girls feel that pressure to be the bouncy, energetic model of a human being, and take it out upon themselves when they aren’t, often in a negative way, according to Badger.

Young girls who interpret the mass media standards of beauty may see themselves as not good enough to what is before them, and boys can become convinced of artificial standards of what girls should look and act like.

“Boys can have an effect on how girls see themselves and how they think they’re supposed to act,” Badger said. “Girls are far too willing to comply with what boys want from them. They damage their self-esteem when they go against what is right for them because they’re too worried about not being ‘popular’ or getting dumped.”

Nash Grier, Cameron Dallas and JC Caylon, who have a combined total of 8.2 million followers on the popular, 6-second video app, Vine, have recently gone to YouTube to produce videos for their teen fan base.

In their most recent video together, “What guys look for in girls,” Grier, Dallas and Caylon commented on what they believe are the most desirable attributes of girls.

“Shave! Brush your teeth, shave!” Grier said in the video. “When you have that little peach fuzz… no. When you have arm hair, no, just wax it, shave it. Just when there is hair, it’s terrible.”

The video received over a million views before it was deleted a few weeks ago.

Along with physical appearance, Grier, Dallas and Caylon gave instructions on how girls should act, calling on them to be happy, active and energetic, but “not annoying about it.”

“There is this idea of what we should be,” Messino said, “People shouldn’t focus on what random people want them to be or do. It may be cliché, but just be who you want to be”.