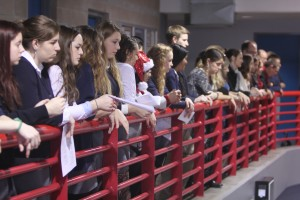 The four-school community gathered in the Herbert Center last Friday for Noëls. Students sang Christmas carols divided by their grade level and language class. Songs were sung in French, Mandarin, Latin and Spanish. Noëls were originally sung in French as a gift to the Religious of the Sacred Heart who acted as the head of school, and are now sung for the president and the heads of the four schools. Songs such as “Casca Belles” and “En el Portal de Belen” were added in the 1970s when Spanish was introduced into the curriculum. Noëls once included a carol in Japanese, and this year included Mandarin. The teachers ended the Noëls with a rendition of “We Wish You a Merry Christmas”, unlike years prior when students were the only ones singing.