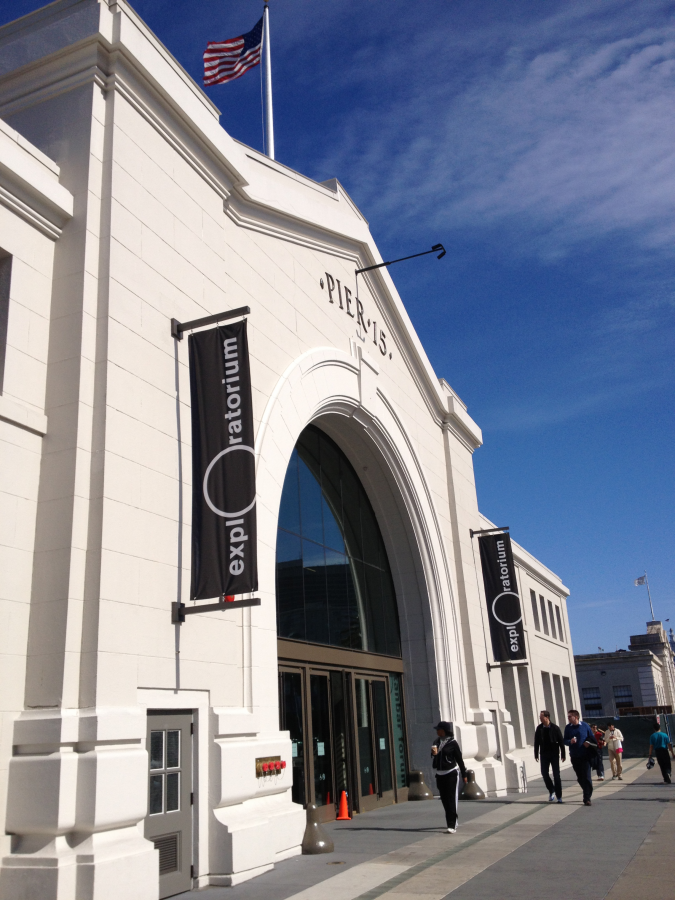 Passers-by look into the Exploratorium’s new space at Pier 15 on the Embarcadero. Located on the water, the museum is set to open on April 17, proceeded by a gala the night before. The new space will feature 150 new exibits as well as outdoor exibits and a bay observatory.

San Francisco’s hands-on family science museum, the Exploratorium, is moving to a new location at Pier 15 on the Embarcadero and will reopen on April 17.

“We needed more space to help the world learn,” Linda Dackman, a media representative of the Exploratorium, said. “We have teachers come every summer and we had to turn away two of three due to space, and we wanted to have a greater space for more exhibits.”

The Exploratorium’s former home of 45 years at the Palace of Fine Arts was leased through San Francisco Recreation and Parks. The now-vacant space is set to house Town School starting Aug. 1 for the 2014–15 school year while the school is renovated, according to Town School headmaster Brewster Ely.

“The Palace of Fine Arts is such a memorable place,” sophomore Caroline Lo said. “I will always think of the Exploratorium being there, but I think the move will change the way that it is viewed and it will have a more lively and open atmosphere on the water.”

Guests willing to pay the minimum of $25,000 per table at the Observatory Dinner gala on April 12 will be among the first to preview the Exploratorium.

Opening Day will offer free admission to the entire museum, including the new outdoor exhibits and bay observatory.

“We cannot anticipate how many people will come to the opening — hopefully very many,” Dackman said. “We have 600 exhibits, including 150 new exhibits which we hope to bring in families.”

The museum has been looking for a larger, permanent space to expand since the 1990s, according to Dackman. Once Pier 15 became an option, the Exploratorium began a 6-year process to renovate the existing building.

Until the Exploratorium reopens, pop up science booths are being set up at unexpected spots around the city at places like Aquatic Park and Ghirardelli Square. To track the locations of the booths, follow @theexplainers on Twitter.