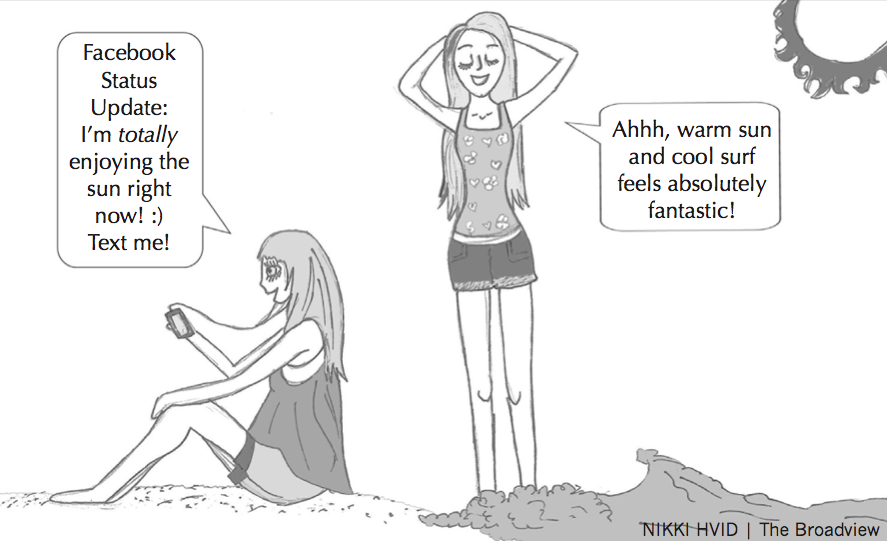 New social media options keep popping up where you least expect them, from new ways to edit photos on-the-go to virtual pin boards. Now that almost everyone has a smart phone teens are wired in to these new networks 24/7 with almost no time to sit back and appreciate the less plugged-in aspects of life.

It’s hard to convince members of our generation to turn their phones off, power down their laptops, and not check in on Facebook — or Foursquare. Social media has become such a prevalent part of our lives that people consider being unplugged or off the grid to be a foreign concept.

These new electronic time drains can have benefits. Freshman and Sophomore Classes have Facebook homework groups where they can receive updates from their teachers and ask questions. Another legitimate Facebook group is “Convent Clothes,” a student group focused on selling used clothing at affordable prices. As useful these two groups can be, they’re both still on Facebook and they both make procrastination too easy.

Instead of spending time with our parents, going outside with our little siblings or even opening a book we waste our time mindlessly scrolling up and down through our newsfeeds, Tweetdecks, dashboards and Pinboards.

Students often complain about not having enough hours in the day to complete all their assignments and to take care of their responsibilities. In reality, we would probably have just enough time to get everything done if we were not permanently procrastinating with Facebook, Twitter, Tumblr — or anything else.

We might miss out on the latest breaking news of who is “in a relationship” or an item that has been reblogged 570,000 times. We might not be up to date on what Justin Bieber wants us to “Belieb” on our Tweetdecks, but we just might do something that’s worthwhile with our time.

No offense to those who think “Beliebing” is worthwhile — and after his new music video for “Boyfriend” few would disagree. But opening a new book may be slightly more beneficial for the brain, considering how there aren’t any college degrees with a concentration in Justin Bieber.

Taking time to unplug is about more than just doing homework — it’s about mental health. Everyone should take a few hours every night to hop off the grid, and think of it as a mini vacation or an escape to the beach — where there’s no cell service.