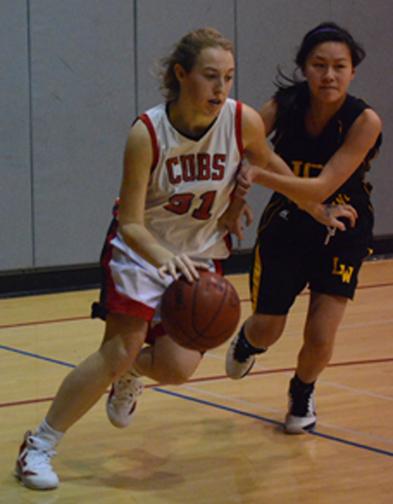 Senior Caroline Welsh drives on a Lick-Wilmerding player during the Cubs 50–39 victory. The Cubs remain undefeated and on top the Bay Counties League West. SOPHIA REDFERN | The Broadview

With eight wins under its belt, the Cubs are bearing the load of a lofty goal — a third consecutive undefeated season. But with such a young team with only one senior, head coach Jon Mercado is perhaps more practical.

“On the floor they don’t know what to expect sometimes, so we can just say ‘play hard’ and we can worry about the mistakes as we go,” Mercado said. “We feel that we would rather have them playing hard and making mistakes than not playing hard.”

This aggressiveness is part of what powered the team to the top of the Bay Counties League West.

The team dominated Marin Academy on Tuesday night 55- 40. The Cubs and the Wildcats played neck and neck In the first half of the game, but in the end the Cubs pulled out with a solid win.

“We worked well from inside,” Shannan Lum sophomore player said, “We improved from the last game when they beat us.”

Even though the team lacks eight, the players are strong when it comes to shooting according to Mercado. The team has an eye for open shots and are able to shoot from all over the court, but can sometimes struggle to hit the mark.

“The disadvantages to having a young team deals a lot with execution, especially late in the games,” Mercado said.

Convent pulled off a nail-biter on Saturday, squeaking out a 49-48 win over International High School, a possible NCS competitor. Sophomore guard Jaime Hum-Nishikado’s runner with 13 seconds left in the game followed by solid defense secured the win for the Cubs.

“We go out to every game thinking its the biggest game of the season,” team co-captain Bianka Quintanilla-Whye said. “It’s scary because there’s so much pressure and teams are out to get us.”

The team has improved greatly since the preseason when it lost four nonleague games, and is working hard to win its third undefeated season, but it will be a challenge with a target on their back.

“We are affective a lot because of our balance and we always have multiple threats on the floor,” Mercado said.

The team’s strengths in many fundamental areas is unpredictable, according to Mercado. This balance creates stability in the team and they are able to defeat difficult rivals such as Lick, University and International.

“We saw a lot of good teams early on, and so we know how hard we have to play and how much we have to value the basketball,” Mercado said.