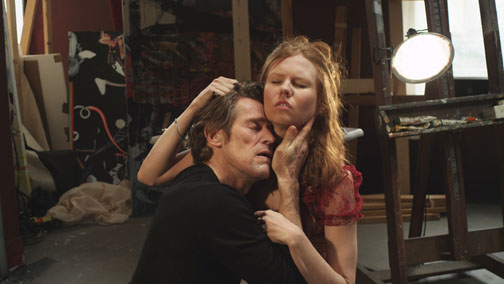 Willem Dafoe and Shanyn Leigh star together as a New York couple from Abel Ferrara’s “4:44 Last Day on Earth.” This film shows on opening night and is 90 minutes long. IFC Films | with permission

The 14th annual San Francisco Independent Film Festival will hold screenings at the historical Roxie Theater, located in the Mission district, Feb. 9–23. This festival will feature 78 films over 14 days.

What started out as a way for IndieFest founder Jeff Ross to show off his friends’ films to a broader audience quickly evolved into a full-fledged film festival.

The first IndieFest drew an audience of 3,000 over a four-day period and today, more than 10,000 people gather to watch the visions of budding cinematographers as well as Oscar-nominated documentarians. Ten countries are represented in the festival with 34 films shot in the United States.

Posters for the event have been placed all around San Francisco in local shops, coffeehouses and bookstores to help with publicity and bring in a new crowd.

“I am very interested in going because independent films are the creativity of America,” theology teacher Paul Pryor Lorentz, who also teaches Film as Sacred Text during elective, said.

Lorentz says he is rounding up a group of students to attend.

Independent films must be shot, produced and directed outside of the realm of a major studio, often giving the director more creative license and fewer censorship guidelines.

Ticket bundles for IndieFest range from $50–160, but regular screenings and same day purchases are $11. Tickets purchases and film previews are available at http://sfindie.festivalgenius.com.