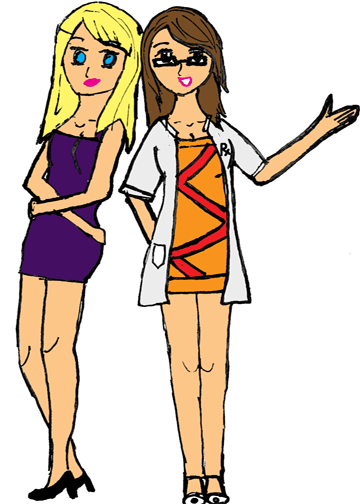 Sophomore Ayesha Sayeed swipes through the virtual clothing choices displayed on the screen for her Top Girl to wear. She buys a new purple dress and watches her avatar’s “Club Hotness” meter increase.

Sayeed is one of many students who has started playing the game Top Girl on her iPad.

“I got hooked on the game because a lot of the volleyball team plays it,” Sayeed said. “It can be a little sexist in the way [the avatars] look and how there’s a hotness meter, but it’s so unrealistic that it’s almost funny.”

The hotness meter in the game is a type of experience bar — increasing the avatar’s work hotness and club hotness — in order to gain better jobs and more access to clubs.

“The entire idea of an avatar is to create another self,” school counselor Annie Shawe said. “It sometimes allows people to have an alternate identity, of which is a person that they actually want to be and what that does while it is fun and lovely in the setting of the avatar, it still is not real and detracts from someone’s real life and her own realistic aspirations.”

A player is able to select everything about her avatar, from the clothing she wears and boyfriend she dates to her hairstyle and skin tone. But one attribute for characters stays the same for every avatar — her body shape. By default all players have a much smaller waist when compared to their hips and chest.

Shawe says having an avatar in a game removes the principle of “self” and “other.” A girl should be able to look at another person and then look at herself and be okay with that difference, however having an avatar it deteriorates those boundaries.

“Every little girl, when she’s playing with Barbie, wants to be Barbie — but she’s a doll,” Shawe said. “This is like a virtual Barbie, except you get to be her.”

When the game first starts, the player is restricted to only three jobs; assistant, booth babe and model extra. Better jobs are only available to her if she buys more clothing for her closet, with the clothes increase her Work Hotness.

The player is then also able to flirt with boys at clubs, who give her avatar better gifts and other benefits once she snags a better boyfriend. Similar to increasing her character’s Work Hotness, the player must buy clothing that increases he Club Hotness in order for the potential boyfriends to be accessible.

“It’s really misogynistic,” senior Annie De Lancie said, who picked up the game after former Women’s Studies teacher Sarah Garlinghouse suggested it, “especially because it judges and rates women on the way they look.”

Often times when shopping for clothing or flirting at the club, the avatar strikes several different feminine poses, such as flipping her hair, putting her hand on her hips and having her hands behind her head. The avatar can use these same positions to flirt with a guy after buying him a drink.

The game neglects to address the intellectual properties of women, according to De Lancie, who wrote a blog post accessible only to her class about her reactions to Top Girl for Women’s Studies after exploring the game a little.

After De Lancie’s avatar started talking to one of the guys she met in Top Girl’s club, a message popped up telling her the she was not hot enough and had not ordered an expensive enough drink.

“I stopped playing because I ran out of points,” De Lancie wrote, “but I was also extremely shocked and annoyed.”

The game plays in real time, so if a player is absent for a week, then she also abandons her avatar’s boyfriend for the same amount of time. The game then gives the player a choice to either abandon her boyfriend or buy him a pricey gift, purchased with real money.

Although De Lancie says that the game is misogynistic and is far from real, parts of its appeal are understandable.

“[Top Girl is] entertaining and a good way to pass the time,” Sayeed said. “I enjoy playing it even though it can seem sexist, but it’s not real and it’s only a game.”