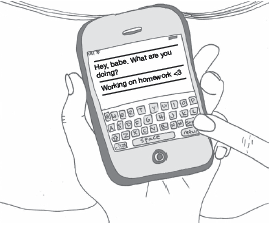 Students study for up coming tests in the Center during Breakfast Club while sophomore Katie Stableford glances at the unanswered message “where are you” on her cell phone screen as she waits for her boyfriend SHHS sophomore Connor McKeon to finish Jazz Band so that they can spend time together before the school day begins.

While relationships are common in high school — nearly 60 percent of American girls have relationships that last through their senior year of high school, according to Stark Strong’s Relationship Matters (ReL8) — there are still questions on whether dating affects academics.

“I think having a relationship can be good because you get to learn how to be with other people in the same or opposite sex,” psychologist W. Keith Sutton said. “Yet you have to keep your head about you and don’t allow the relationship to control your academic as well as personal life.”

Sutton, who has been working with teenagers for 11 years, has found that longer relationships can be more distracting, but tend to be more mature.

“I prefer having long relationships because I don’t date just to date,” senior Ronella Rosenberg said. “Though, I do admit that a relationship takes a lot of my time because of texting, calling or going out on dates.”

Rosenberg describes how her relationship with her past boyfriend was romantic, but also stressful. She remembers calling him or video chatting late at night and throughout the school week just to check in.

“My relationship doesn’t affect me all of the time,” senior Maya Sycip said. “Yet on certain occasions it does. Most of the time I would much rather spend the day with my boyfriend than work on an essay.”

The high percentage of teenage dropouts may be correlated with the increasing percentage of teenagers in long-term relationships, according to the RAND Corporation.
“I do know of couples who help each other out with homework,” freshmen Shannon Lum said. “That to me is a healthy relationship to have in high school because it allows teenagers to experience the romance of high school as well as maintain good grades.”

Studies have shown that academics are often most affected by a breakup or the end of a relationship, according to ReL8.

“The pain of a loss from a relationship is tremendous because humans are hard wired to attach to others,” Sutton said. “When we lose that bond or attachment it can really affect our decision making.”

Sycip discusses her past relationship of three years and explains how that had a domino effect on her personal as well as school life.

“My boyfriend and I broke up two major times,” Sycip said while staring at the ground. “The first time I could neither function at school nor concentrate in class because it was so painful and for a while I just had to stay home.”

Breakups are something people go through but it does not have to control their life says Sutton, who has seen teenagers forget about school because of being dumped and think that it is the end of the world when it really is not.

“Being sad is okay for sometime,” Sutton said. “The important thing is to wait before making any rash decisions since the mind will not be thinking clearly after a break-up and talk to friends and parents as well. It may not seem so, but they can actually help in situations like these and eventually the pain will subside.”