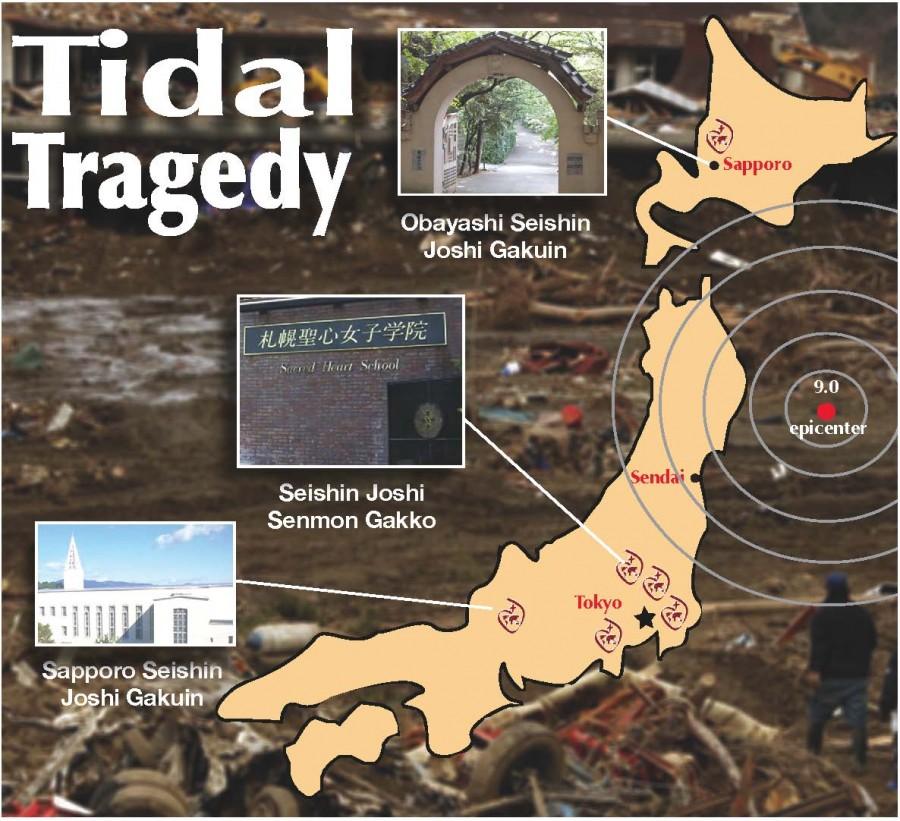 A student-run relief fund plans to raise money for Red Cross tsunami relief efforts in Japan and show support for the Japanese Sacred Heart Network schools that survived the earthquake and tsunami with minimal damage.

“There were three big earthquakes and tsunamis on that day and they worked in chain reactions into a huge mega-earthquake with tsunami,” Provincial of Japan Koko Nagano, RSCJ, said in an email to the Sacred Heart Network. “Since big damages were done by the earthquake to the atomic power plants, people nearby, and us, who are 200 km away, have worries about radioactivity.”

While the seven Sacred Heart schools in Japan avoided major damage, many students and their families are still trying to return to normal life.

“We are just surprised and feel sad,” Kanari Tsuji, a senior at the Sacred Heart School in Sapporo who is learning English as a second language, said via Facebook message. “I haven’t found the way to help all victims still now cuz damages were too severe. We are afraid abt nuclear power plant in Fukushima, too. Now, the situation is awfully complicated, so we can’t understand which information is true.”

Freshmen Sophia Kelley and Amelia Baier are heading the relief drive at CSH.

“The theology teachers’ [classrooms] are going to have glass jars where the students can donate their spare change, which will be donated to the Red Cross,” Baier said. “We chose Red Cross because they have been around for a long time and they have the equipment to go into the nuclear exposed area and hard–to-reach areas.”

The money raised will go toward repairs for Japanese cities damaged by the 8.9 earthquake and subsequent tsunami that ravaged the country. The affected residents were evacuated from the destroyed cities into towns near the school and Tokyo. Damaged areas have begun the process of rebuilding, despite the challenges.

“The aftershocks happen,” Masako Egawa, RSCJ said in an update letter. “We shake a bit for a few seconds and then stop. These small tremors are common although now we have several each day instead of one every month or two.”

The Sacred Heart schools in Japan plan to assist Catholic churches that have been affected, as the primarily Buddhist country gives little government assistance to Christian organizations.

“I wanted to get involved with the fund after I saw a video of people in the village on a look-out spot watching the water come over a thirty-foot building watching their houses destroyed and everything they own go into the sea,” Kelley said.

Tsuji says she is grateful for the international support Japan is receiving.

“We have been starting donations to help those people even though, it was little power,” Tsuji said. “We strongly felt that we needs not only all Japan’s help but also other countries’ help. Now, lots of countries help Touhoku. so i wanna thank all countries’ help and kindness.”