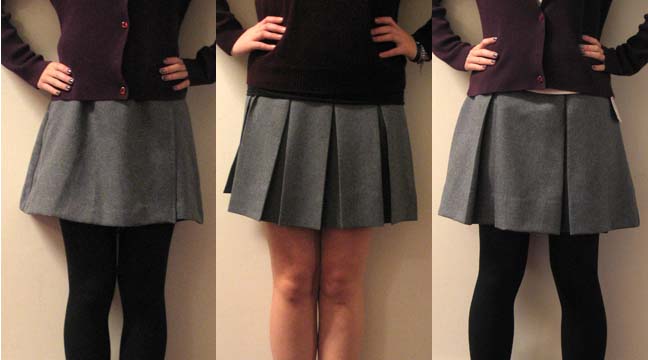 The student body is deciding which of three skirts will be the new uniform. The current unifrom skirt was selected in 1976.

Students got their first look at new uniform skirt options at at Principal’s Meeting Monday morning, then voted for the new skirt later int he day.

“I think its time to update the uniform, but the student body should definitely participate in the selection process because they are the ones who will be wearing the new skirts,“ history teacher Sarah Garlinghouse said.

Garlinghouse showed photos of Convent’s past uniforms and the transformation of style over the last century from a long gown with high collars of the early 1900s to the current burgundy sweater and gray skirt that has been apart of the Convent uniform since 1976.

Three skirt options including a  wide-pleated skirt, an a-line skort  and a skirt with two wide pleats in the front and back — the only option with pockets — were modeled by freshmen Lizzie Whittles, Paige Biderman and Kellie La.

“The fabric on the new skirts is softer and heavier than the ones we currently have,” administrative assistant Jeanne Asdourian said. “And this kind of material drapes well, so I think it would look very flattering on our girls.”

Asdourian wore the same skirt students currently wear when she attended Convent in the late 1970s.

“When I was here it was more of an a-line skirt,” Asdourain said. “The cut looked good on almost everybody.”

A random sampling of the student body showed different preferences between freshmen/sophomores and juniors/seniors.

“I think the really pleated one is unflattering, and the skort is not a nice style either,” senior Genevieve Puccinelli said. “If i had to chose one skirt it would be the two pleated skirt because it adds sophistication as well as comfort.”

“I like the one with the most pleats,” sophomore Sara Kelson said. “The rest of them are unflattering and I believe that the freshmen and sophomores should have more of the vote because we will be wearing the skirts much longer than the juniors and seniors.”
Head of School Andrea Shurley said she is tallying the votes and discussing the final results with the administration and should have a decision shortly.