Fencing clinches first in the city 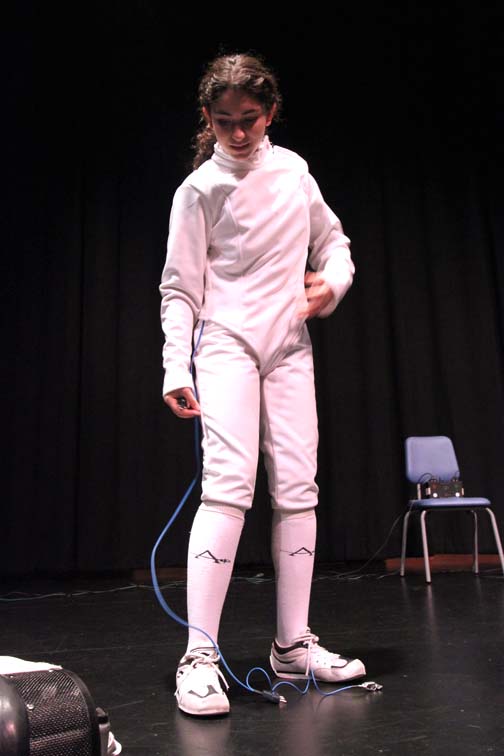 Senior Beth Levin demonstrates putting on her fencing gear before a mock bout at Principal's Meeting on Monday.

The fencing team clinched first place in the city for the second year running, with two girls progressing to state level competitions after the All-City Jamboree on April 24.

“This team has an amazing work ethic,” said coach Leo Bello. “They know the basics, simple and strong, support each other, and have great individual skills. It made another good season.”

The team finished with a 7-1 record, having lost only to Galileo, tying Lowell’s season record.  Lowell’s loss to the Cubs earlier in the season placed the Cubs in first for the girls’ division. Freshman Eliza Klyce finished undefeated with a 14-0 bout streak.

“We fenced very well this season,” said Klyce, “I think everyone would agree the team improved a lot.”

Klyce missed the All-City Jamboree, but automatically qualifies for state championships as a nationally ranked fencer and will compete with team captain Beth Levin who placed 8th at the Jamboree.

“We all practiced a lot and each pulled our weight,” said Levin, “Fencing is unique in that you depend only on yourself in the match, but you have the support of your friends behind you.”

The team presented its glinting hilt-shaped trophy to the school in a short fencing demonstration at Principal’s Meeting on Monday, April 26.