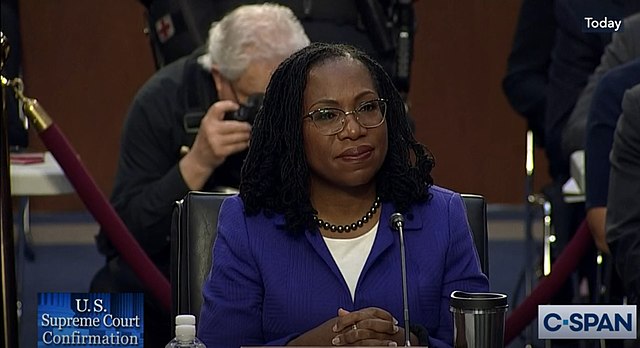 Judge Ketanji Brown Jackson of the United States Court of Appeals sits for her second day of her confirmation hearing into the Supreme Court. The hearings are held in Washington D.C. by the Senate Judiciary Committee.

Jackson is currently a judge on the U.S. Appeals Court and was confirmed by Biden in 2021. When approved, Jackson will be the first Black woman to be nominated onto the Supreme Court, and the first justice from a criminal defense background since Thurgood Marshall in 1967.

“I think he chose a good nominee,” junior Sophia Wu said. “However, at the same time it’s a popularity contest, just like any other election.”

At the beginning of the confirmation process it was unclear if Republican senators would vote for Jackson. However, earlier this week. Senators Lisa Murkowski of Alaska and Mitt Romney of Utah became the second and third members of the Republican Party to fully endorse Jackson.

“Jackson demonstrates judicial independence, and she would bring an important perspective into the court,” Murkowski wrote in a press release. “My decision also rests on my rejection of the corrosive politicization of the review process for Supreme Court nominees.”

In a statement released in January, Justice Breyer formally announced his retirement citing he intended to step down during the Court’s summer recess as long as a new justice had been confirmed.

“I think it’s good because the Supreme Court kind of fell apart after Ruth Bader Ginsberg died,” sophomore Isabel Knott said. “I think it’s important for the court to more accurately represent the diversity of this country.”

As of April 4, the Supreme Court nominee is expected to win full approval by the end of the week, according to Cable-Satellite Public Affairs Network . All 50 members of the Democratic Caucus backed Jackson in a 53 to 47 procedural vote on Monday evening.

“It’s 2022 and it’s ridiculous that there hasn’t been a Black woman on the Supreme Court yet,” Wu said. “I think it’s important to expose higher positions of power to women, especially individuals of color.”