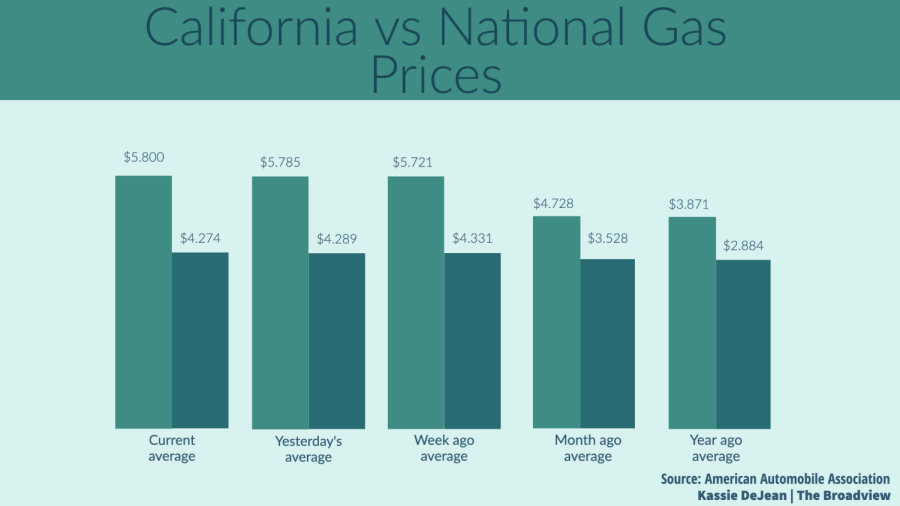 The current national average price for a gallon of unleaded gas is $4.28 according to the American Automobile Association. In San Francisco,however, purchasing a gallon of gasoline costs about $1.14 more than that.

“I think there should be a ban on gasoline imported from Russia because that’s a big money maker in their economy,” junior Isabella Mercado said. “If gasoline stops being a product that we’re buying then they’ll stop making money and maybe Russia will finally back out of Ukraine.”

Events in Ukraine have caused gasoline prices to skyrocket because of the low supply to high demand ratio. As Russian attacks continued to intensify, traders, shippers and financiers ostracized Russian oil, removing a large majority from the global supply.

“I have to fill my car a few times a month which isn’t ideal,” religion and spirituality teacher Clint Hackenburg said. “I’m thinking of getting an electric motorcycle because it would be more convenient than using a combustion car and better for the environment.”

Oil prices shot up after the U.S. implemented a ban on Russian imports of crude oil, petroleum products, liquified natural gas and coal. In 2021, roughly eight percent of crude oil and refined products came from Russia.

“The gas prices rising up haven’t really influenced whether I drive to school or not,” junior Jardin Davis said. “However the gas is still very expensive which is kind of annoying.”

The rise in gasoline prices is beginning to increase the demand for electric cars, according to Edmunds.com. Electric vehicles are expected to reach record sales this year, due to the high demand.

“I don’t know if things will be the same again but a lot of people are buying electric cars which I think will help with prices,” Mercado said. “The supply-demand ratio will change and the price of gas will probably hover around $4 again.”