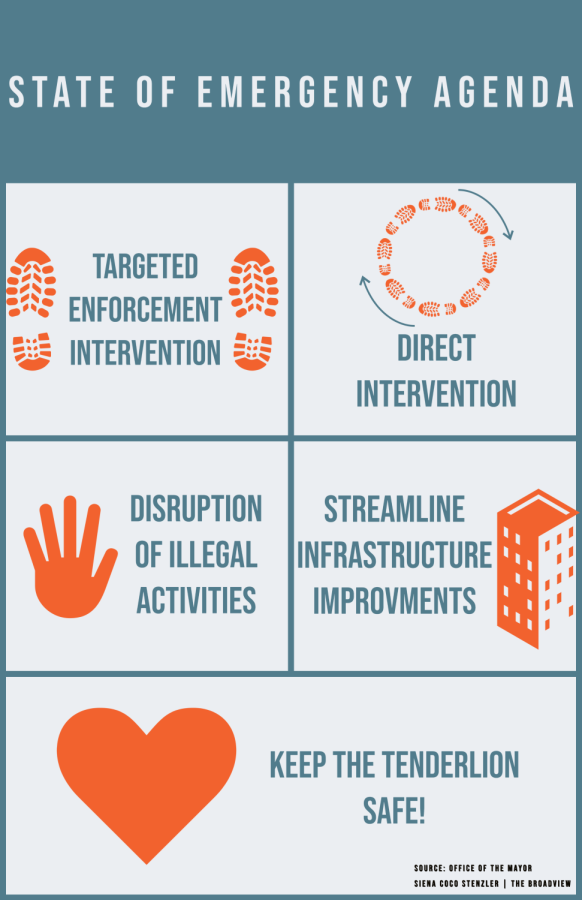 WEB EXCLUSIVE | Mayor London Breed announced on March 14th that she will not be renewing her 90-day state of emergency in the Tenderloin, officially coming to an end on March 18.

“As far as I know, Breed’s goal was to help addicts achieve harm reduction by putting things in place like safe using stations in the city, and clear out some of the tent encampments,” sophomore Saybrook Whalen said. “I haven’t seen much change because there’s still a largely visible unhoused population, but the streets and infrastructure themselves look cleaner.”

On Dec. 17, 2021 Mayor London Breed enacted a State of Emergency in the Tenderloin neighborhood due to a drug overuse problem caused by the Opioid epidemic and the COVID-19 pandemic. Roughly 1,300 people have died during the pandemic due to Opioid overdose, according to ABC News.

“Given the fact that I didn’t know there was a proclamation and haven’t noticed the change says something,” IB Coordinator Devin DeMartini Cooke said. “I have not noticed any difference on cleanliness or drug use in the area that I live in, which is not the tenderloin. However, I would assume that it would be a similar lack of change.”

Breed will continue street cleanings and will continue to support the new linkage center, which hopes to help people receive necessary care and services, according to the Office of the Mayor.

“We’ve always been taught to avoid interactions and what to do in worst case scenarios, which I think is very helpful in developing street smarts and being extra prepared for life outside San Francisco,” senior Sloane Riley said. “Lots of people don’t want their children being exposed to San Francisco drug culture but I think that it’s been incredibly helpful for me to learn about how to best approach these situations and how to be smart about my surroundings.”

Roughly 3,500 children live in the Tenderloin and must navigate their way through it every day, according to Safe Passage. Approximately 1,360 deaths have been caused by overdoses in San Francisco as of Feb 2022.

“Just given the proximal location, it definitely impacts our youth and students at Convent and Stuart Hall,” DeMartini Cooke said. “It is a hard thing not to see because it’s so prevalent in our city.”

Many Tenderloin residents are still awaiting a crackdown on drug dealers as arrest numbers have not increased, according to CBS San Francisco. San Francisco is currently experiencing one of the worst Fentanyl epidemics, according to SF Gate.

“Growing up around profuse drug-use definitely normalizes it for kids growing up in the city,” Whalen said. “Which can be a way to educate the kids but it’s also unhealthy to see those traumatic things from such a young age.”