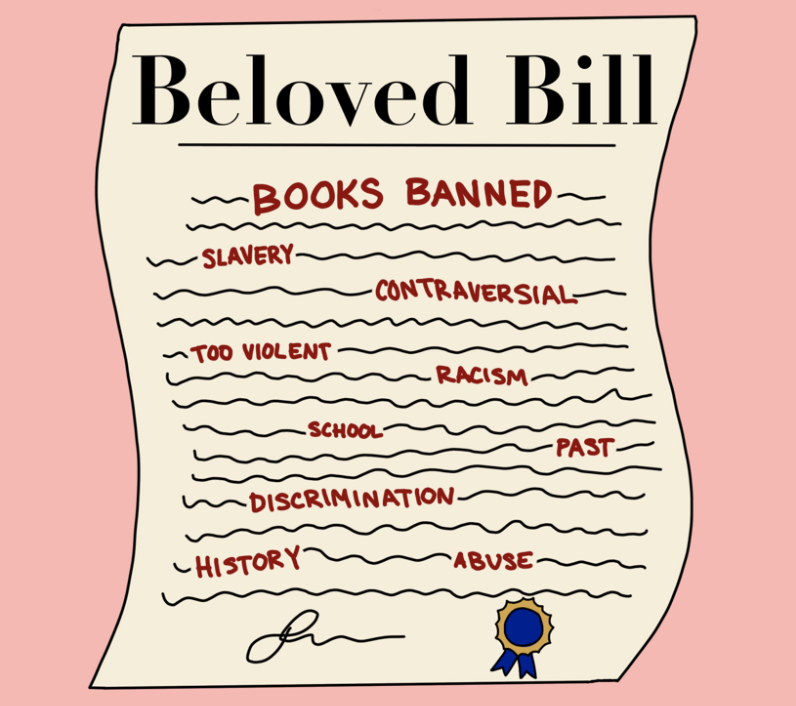 IB English seniors recently finished reading Beloved by Toni Morrison, a 1987 Pulitzer Prize-winning novel set after the Civil War which follows the struggles that freed slaves faced throughout their lives. Beloved, which is roughly based on true stories, goes into great depth about trauma, with scenes of sexually explicit content.

The novel follows a recently freed slave that tries to navigate her new life, as well as the memories of the distress she experienced while enslaved. The novel does not censor scenes of sexual assualt and other acts of violence, as these moments reflect the true experiences of slaves during this time.

Although these scenes and descriptions can make the reader uncomfortable, it is nothing a high school senior cannot handle. However, parents of students who attend Virginia public schools beg to differ.

A parent of a student in the Fairfax County School district in Virginia faced the School Board to contest the teaching of Beloved in school in 2013 and lost the fight. The parent then decided to take this matter to the Virginia Board of Education, where she proved successful, lobbying legislators to enact state regulations.

Virginia House Bill 516, commonly known as the “Beloved Bill,” would “force schools to notify parents if material used in class includes sexually explicit content.” If a parent does not want their child to participate in this coursework, the teacher must provide separate instruction for that student.

The ambiguity of the bill presents a real issue, as literary texts that are integral to high school English curricula seem to fall under the same vague “sexually explicit” category as Beloved. These texts include the Diary of a Young Girl by Anne Frank and many works by William Shakespeare.

The fact that Beloved was the only “sexually explicit” work to be targeted may allude to the idea that this bill was not about general explicit content, but the censorship of the stories of black people.

If students are able to opt out of certain coursework because their parents are uncomfortable with it, it detrimentally affects their learning, as it narrows their world view. If one is only exposed to works that are censored to please parents, they will never be able to understand the true experiences of others in society.

A student must be able to read a broad spectrum of texts, which cover a multitude of topics and experiences, in order for them to gain a greater understanding of society and history as a whole.

This bill would also negatively impact a class experience as a whole, as it is difficult to have productive dialogue about a work when only half of a class is participating.

High school teachers tend to have the students’ best interest in mind when selecting texts to study, and parents should not be able to censor their learning, especially when it seems to only target one group.