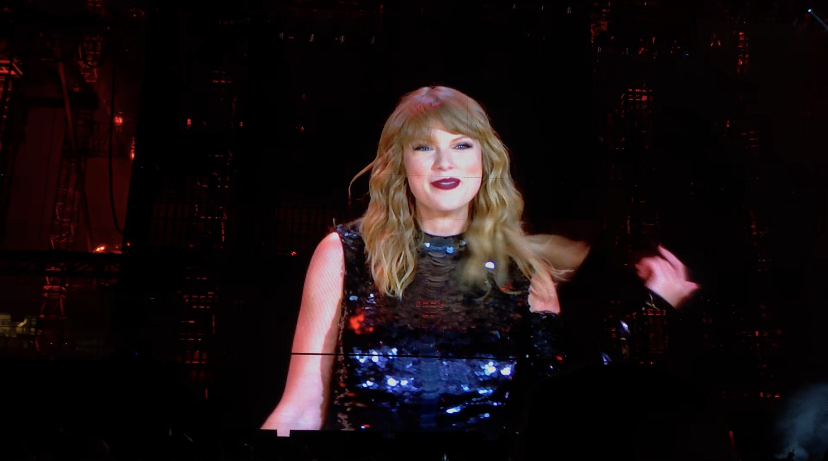 Taylor Swift performs “Love Story” at her “Reputation” stadium tour at Levi’s Stadium in Santa Clara, California on May 12, 2018. Swift has recently released a rerecorded "Taylor's Version" of the album "Red," which was originally released in 2012.

Singer-songwriter Taylor Swift has released re-recording of her old albums starting earlier this year, following the sale of her master catalog to Ithaca Holdings in 2019.

The first re-recording she released was her 2008 album — “Fearless, Taylor’s Version,” The announcement came on Feb. 11, two months after Swift released her album “Evermore” which featured a more alternative tone, as opposed to her exploration of country and pop in the past.

In a 2005 agreement, Swift signed a deal which gave ownership rights for the recordings of her first six albums to Big Machine Records, the label who signed her on, according to an Instagram post written by Swift. Albums were yet to be produced, which meant Big Machine owned the masters to her future music but she would keep the copyright if she wrote the songs.

“I think it’s good that she is able to re-record her old albums,” junior Isabella Mercado said. “It’s important for her to be able to take ownership of her work rather than someone else controlling her.”

Big Machine Records CEO Scott Borschetta sold Swifts’ master catalog in 2019, which contained every album she produced from her 2006 self-titled to ‘Reputation’ released in late summer of 2017.

“This is what happens when you sign a deal at 15 to someone for whom the term ‘loyalty’ is clearly just a contractual concept,” Swift wrote in a Tumblr post. “When that man says ‘music has value,’ he means its value is beholden to men who had no part in creating it.”

She had no prior knowledge that Big Machine Records was going to sell her master recordings, and found out from the public announcement, according to Swift. and she learned about it at the same time that the announcement was made to the world.

“I am so excited that she is re-recording her old albums,” sophomore Jalysa Jones said. “I love that she has this opportunity to take back ownership of what is hers and I’m excited to compare these newer songs to their originals on the ‘Red’ album.”

Swift’s ‘Red Taylor’s Version’ album was released Nov. 12 and  contains the original 16 songs along with nine bonus tracks from the vault, as well as an exclusive message from Swift.

“It’s definitely going to be interesting to see how her voice has matured over the years since the Red albums’ original release in 2012,” Mercado said. “I love the re-recording of her ‘Fearless’ album and I have no doubt that this new album will be amazing, in both quality and lyrics.”

The ‘Red’ album is available on Taylorswift.com, all streaming platforms as well as on vinyl and CD. CDs and vinyls will both include never seen before photos, artwork and handwritten lyrics from Swift.

“I’m excited to get my copy of the Red album and see all the little Easter eggs she probably has hidden within the CD and booklet,” Jones said. “I just know that she is going to have little clues for upcoming songs and albums within the handwritten lyrics and I’m excited to find them.”

The ‘Red’ album features the ten minute version of the song ‘All Too Well,’ which previously had to be cut down to five minutes for the original album, according to Swift.

“I am most excited to hear the re-recording of ‘Everything Has Changed’ since it was one of my favorite Taylor Swift songs when I was younger,” Mercado said. “I also cannot wait to hear her songs from the vault and all the other surprises that I just know she has in store.”