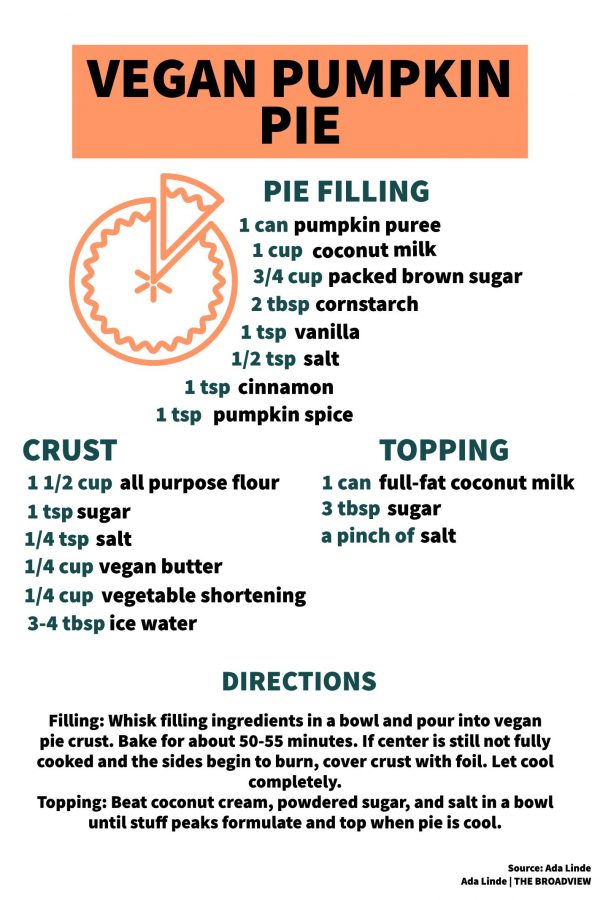 Nearly 250 million turkeys are killed each year, and of those, about 46 million are killed for Thanksgiving meals. So, while the holidays are a time for giving thanks and celebrating, it is not so kind to animals, especially turkeys, according to The United States Department of Agriculture.

“Before I was vegetarian, we would eat turkey, mashed potatoes, and pie at Thanksgiving dinner,” senior Takouhi Asdourian said. “Now that I am vegetarian, not much has changed except for the turkey — my family and friends still eat it, but I generally stick to the foods without meat on Thanksgiving.”

Nearly 30% of Americans are willing to consider celebrating Thanksgiving without the turkey or any other meat, according to a study done by Dynata on behalf of Meatless Farm in 2019. The most convincing factor for Americans to consider meat-free options is physical health, with almost 60% of respondents stating that health concerns over meat, according to the same study.

“I stay vegetarian, especially around the holidays, because I haven’t eaten meat since I was nine years old and it’s sort of like a streak I don’t want to break,” sophomore Lucy Corrigan said. “But I still want to celebrate Thanksgiving with my family.”

Dealing with dietary restrictions at holiday dinner tables can get tricky: most vegetarians and vegans avoid traditional foods and come up with their own classics, according to Asdorian.

“My favorite non-traditional, vegetarian Thanksgiving plate is mac and cheese,” Corrigan said. “It’s fun to mix up conventional food pallets on holidays to get a new taste while being kind to animals at the same time.”

Tofurkeys — a blend of wheat and tofu stuffed with bread crumbs and seasoning — can be another option for vegans and vegetarians on Thanksgiving.

“One year I tried a tofurkey, but that was definitely a one time thing and I never ate it again,” Asdorian said. “The food has never really been an issue for me. There are plenty of vegetarian foods for me to enjoy instead of turkey.”

Vegans and vegetarians don’t have to completely cut Thanksgiving classics out of their tables: many of these dishes can still be created with a substitute of dairy products for vegan butter or nut milk.

Some of these recipes can be found on popular vegan and vegetarian websites, blogs, and instagrams such as The Minimalist Baker, With Food and Love, and The First Mess.

“At Thanksgiving with my family, we always have vegetarian options because no one is really that into meat,” sophomore Orly Cook said. “Recently, we’ve started making butternut squash soup, which is very easy and also feels like a Thanksgiving food.”

SAGE Dining Services also implements vegan and vegetarian options like these into their everyday meals. In years past, SAGE has prepared holiday meals that include turkey, mashed potatoes and cranberry sauce. The vegetarian option is most often tofu, according to Asdorian.

“I think for the most part, SAGE offers solid vegetarian options — definitely not enough vegan options year-round, but especially during the holidays,” Asdorian said. “My biggest issue with the vegetarian SAGE options is the lack of different options. The menu is often repetitive and very obscure.”